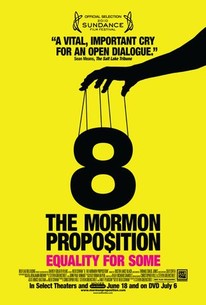 Critics Consensus: It's unabashedly biased, but this look at the fight over gay marriage in California is impassioned and provocative.

Critics Consensus: It's unabashedly biased, but this look at the fight over gay marriage in California is impassioned and provocative.

Critic Consensus: It's unabashedly biased, but this look at the fight over gay marriage in California is impassioned and provocative.

"8: THE MORMON PROPOSITION" exposes the Mormon Church's historic involvement in the promotion and passage of California's Proposition 8 and the religion's ongoing campaign against gay rights. The film takes place in California and Utah as Mormons, following their prophet's call to action, wage spiritual warfare with money and misinformation against gay citizens, doing everything they can to deny them of marriage and the rights that come with it. "8: THE MORMON PROPOSITION" opens in theaters on June 18th, 2010, two years after the first gay marriages took place in California (June 17th, 2008). -- (C) Official Site

News & Interviews for 8: The Mormon Proposition

View All 8: The Mormon Proposition News

Critic Reviews for 8: The Mormon Proposition

It's marred by loaded language and a propagandistic tone that undercuts rather than promotes its purposes.

[Cowan] expands his sad and furious homegrown film to record the misery of gay Mormons sometimes driven to suicide over being rejected by their church and families.

There is a message here of the necessity for tolerance, but 8: The Mormon Proposition would have been better had its makers presented it in a more consistent, artful fashion.

An impassioned piece of timely agitprop.

No matter what your stand is on gay marriage, you're bound to come out with a broader definition of family values.

This propaganda style doc is too busy evoking intolerance (ironically) and fear mongering to provoke any rational analysis of the facts.

The film's powerful correlative lesson? That citizen journalism will play an important role in outing big-money political players who would like to silently put their stamp on laws from the capitalistic safety of the shadows.

From the hard facts of the church's PR wrangling and shady financial reporting, to the human fallout of their treatment of gays both inside and outside their flock, the filmmakers hammer hard on the Mormon church.

The film also fails to take into account the many other factors in play during the 2008 election, narrowing events down to one all-encompassing Mormon-based explanation. 8 means well, but is too blinded by its own biases to do its cause justice.

The thing the film does best is to put a human face on the issue, to show us individuals (and couples) who were directly affected by the passing of Prop 8.

Audience Reviews for 8: The Mormon Proposition

This controversial yet popular documentary focuses on the Mormon stance on gay marriage, gay youth, and the religion behind the political workings of Proposition 8. The presentation of the facts is pretty skewed in this film. Instead of looking at the entire process of the passing of Prop 8 after the takedown of Prop 22, including the other lobbyists, the presidential election happening at the exact same time, and the corruption of the California pundits, the makers of the film turned a blind eye and moved in on the Mormon Church. I can say without a doubt that this film showed me the full extent of the church's involvement and dereliction in Prop 8's history, but to put a stranglehold on the true story with propaganda isn't helping anyone. I also had problems with the reenactments which looked like America's Most Wanted. Even with all these unmistakable flaws, I will support this film to the death because it is one that is more stirring than you can imagine. It has the heat of infallible injustice and the fight to resurrect what was lost after so long a fight to make this country truly free. I don't care if your politics don't coincide with mine, or if you simply can't agree with me because of some moral ambiguity, but you can't tell me that the personal stories, and tributes, and loss in this film doesn't wrench you dry of tears. I myself cried at least three times while watching this, only once in joy. The film exhibits the biased hate, but goes into strange territory when it also covers reassignment at BYU and gay suicides. The suicides do tie-in, but aren't presented correctly. Instead of making this about the injustices of the actual legislation they became emotional and were overcome by a want to get to our sentiment. They did this with the heartbreak of ignorance, but this film could have done and been so much more if they thought more about what they had wanted to say and simply said it, instead of being so petty. It's a shame that more couldn't be taken out of this film because of sheer brevity.

Ya know when "traditional marriage" people scream about liberal or San Francisco values invading the heartland and all that sort of stuff? 8: The Mormon Proposition provides an educated, rational retort to the claim. See, the Mormon Church, headquartered in Utah, dumped millions of dollars into the California's Proposition 8. This doc certainly has a point of view it is not ashamed to tout on its sleeve; that's not the point. The point is to trace the Mormon Church's anti-gay stance and their mobilization to affect public policy outside of Utah. It is the perfect compliment to Saving Marriage, showcasing a different side of the marriage equality fight. In the final 15 minutes, the doc tends to go off the rails just a little bit with a story about a Utah congressman. Before that, though, this is a crucial doc for the pro-gay marriage side and includes enough evidence to begin reforming tax exemption laws, disclosure and to call into question all the "because god says so" beliefs we hold.

I want to be an advocate for revoking the Mormons tax exempt status for how they influenced a political race. 22,000,000 from LDS to affect the Prop 8 vote? If I were LDS I would be demanding an accounting for such foolish spending!!

Regardless of your stance on the topic of "Gay Marriage", this film is a must see for anyone with an interest in politics. This film is just as much about the darkside of politics and the shady and manipulative dealings of organized religion in our political system as it is about "gay marriage". And while I thought it was meant to be a documentary...it is far too heavy handed for that label. But none the less interesting. It's hard to imagine an organization as sinister and hypocritical as the Catholic church, but I think the good folks at the Mormon temple are RIGHT up there. And they may very well take top honors in the CRAZY category. In my humble opinion there are aspects of the religion that border on CULT like behavior. This is a group that professes to be based on the religious history of ancient American peoples, which were translated from "golden plates" by their founder using magic "seer stones". Because (conveniently) the "golden plates" were written in an "unknown" language. The church has a living "prophet" who they believe has a direct line to God. So that anything that he says is essentially "the word of God" and therfore must be obeyed. They also did not allow "blacks" in their church (up until the 1970's), because they believed that we all had an "estate" before we came to earth and the people who were obedient to the laws that were given to them while they were "there" recieved greater blessings "here". Translation: The bad people from "there" end up being born "black and with other disadvantages" in this life. Nice. And while they've (publicly) denounced their polygamist past, their idea of heaven is life on another planet where polygamy reigns supreme. So obviously they have no problem with polygamy other then the bad press it's given them. And as if the fact that these lunatics are able to lure as many people as they do into their web isn't disturbing enough...they are now (like most religions) sneaking into the political arena. Secretly donating MILLIONS of dollars to political candidates and causes (via strong arming their followers), while still hiding behind the tax exempt status. So much for the speration of church and state. And why is it that some of the most "holy" people in organized religion look like evil personified? Literally EVERY person at the top of the Mormon food chain looks like a villian from a 1940's crime drama. Could it be that all of the lies, deceit and hatred eventually starts to revel itself in the faces of those who propagate such ugliness? I think this is really worth seeing, if only for the sake of being able to debate the issues presented.