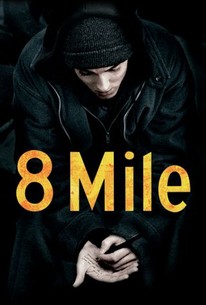 Critics Consensus: Even though the story is overly familiar, there's enough here for an engaging ride.

Critics Consensus: Even though the story is overly familiar, there's enough here for an engaging ride.

Critic Consensus: Even though the story is overly familiar, there's enough here for an engaging ride.

No matter whom we are, no matter where we live, we're all bound by borders. Many of us are content to live within these borders--others are simply forced to exist within them. But some of us need to break out, burst through, even if what is on the other side is both frightening and unknown. From this comes the tale of one young man's dilemma as he navigates his way through his colliding worlds. Set against Detroit's hip-hop scene in 1995, the story centers on Jimmy Smith Jr., a young white rapper, who struggles to find his voice. The people of Detroit know '8 Mile' as the city limit or a border. It is also a psychological dividing line that separates Jimmy from where and who he wants to be, as he struggles to find the strength and courage to transcend his boundaries.

While not exactly wow, Eminem is solid and credible in a role which could so easily have screeched like chalk across a wet blackboard.

It's easy to like Jimmy Smith as well as to admire him, because Mr. Mathers lets us in, with no sign of calculation, on the kindness, even tenderness, that Jimmy conceals from most of the people around him.

In the tradition of Rocky and Fever, the movie is a shrewdly engineered piece of proletarian pop -- a story of triumph -- but, like Eminem's enraged lyrics, 8 Mile has its own kind of vile candor.

In addition to showcasing Mathers, 8 Mile makes a case for rap as a creative rebel yell.

Since his ascension to pop-culture royalty, Eminem has transformed the messy emotions of his life into musical black comedy. In 8 Mile, that life becomes an equally riveting drama.

Despite the predictable formula, screenwriter Scott Silver wisely avoids taking the easy route every time; there are several small twists you may not expect, and the ending isn't entirely a happy one.

What (partially) saves this movie is the rap battle...why didn't they give us more rap?

A lot of the themes and language in the movie haven't aged well...the soundtrack is amazing, though.

To be admired rather than enjoyed, but a considerable achievement nonetheless.

Outside the rap slams, either the acting or the persona is a bit joyless.

The best review I can give a drama or an actor: When the film ends you still believe the character lives on.

A refreshing way to build a story that is ghoulishly overfamiliar in nearly all its particulars.

Eminem shows he has a natural talent for acting, delivering a strong performance in this solid underdog story that could have been the first of many for him, and this is a well-written drama despite the linear structure that doesn't really allow for many surprises.

After the classic "Slim Shady" and "Marshall Mathers" LPs, Eminem hit the Hollywood show biz button with "The Eminem Show" (album) and "8 Mile" (film). The film is tailor made for the White Rapper. Eminem (as Jimmy "B Rabbit" Smith) blows a "Rap Battle", hangs with his Detroit 'hoodies, and nails slutty Brittany Murphy (as Alex). Eminem wants to be a Big Rap Star. He lives with trailer park trashy mother Kim Basinger (as Stephanie) and lil' blonde sista Chloe Greenfield (as Lily). Ms. Basinger gets to say the line, "Greg won't go down on me." Word way up... Curiously, Eminem does not sport his familiar (at the time) short, bleached do; instead, he wears a knit hat over more natural brown locks. Eminem doesn't contribute any rent money, but he works hard. He is careful to avoid drugs, unlike boozy mother Basinger. Who knew Detroit's "8 Mile" was so drug free? The soundtrack highlights are "Lose Yourself" and a fun rap-up of Lynyrd Skynyrd's "Sweet Home Alabama", which comes off better here than on "youtube". Still, Eminem's pre-Hollywood studio work is much more highly recommended than this semi-autobiographical movie sanitization. 2 Stars 1-18-03 (Updated)

Knitty-gritty portrayal of the rapper "Eminem's" life and hardships. The ensemble including, Murphy, Phifer and Basinger, made exceptional performances and led the way into this mean-mugging adaptation of hardship in unpaved streets of Detroit. 4.5/5