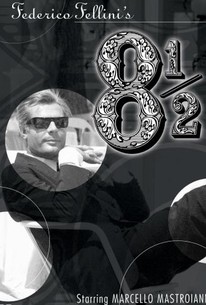 Exhausted from the success of his latest blockbuster film, already feeling pressured to come up with another smash hit, and suffering from a massive creative block, filmmaker Guido Anselmi (Marc Mastroianni) heads off for a mountain resort to recharge and come up with a new idea. His search for inspiration leads him down many strange, twisted paths and these journeys provide the basis of the rollicking, at times riotous, long and mesmerizing 8 1/2, simultaneously one of Fellini's best loved and most deeply personal films. Anselmi's mental journey begins with thoughts of the past. He remembers his parents and a strange scene in which he sees an overweight prostitute dancing on a beach. Boyhood memories are gradually supplanted by those of adolescence and eventually lead him to his current romantic travails as he tries to service a wife and mistress. Increasingly the line between his musing and his real-life activities begins to fade, making it difficult for viewers to discern. In one scene he gives a press conference on the set of his unmade film. Still exhausted and empty, he cannot answer the many questions asked by the media about the production. Ultimately, he abandons the film and begins dreaming of death and longing for the freedom it could bring. As the fantasy progresses, every major figure in his life appears. He himself becomes a flute-playing child and together he and the people begin to dance in a circle as the story comes to a close. The title represents the number of films Fellini had made at that time.

Guido Alberti
as Pace, the Producer

Jean Rougeul
as Daumier, the Writer/Critic

Caterina Boratto
as Fashionable Unidentified Woman at the Spa

Tito Masini
as the Cardinal

Eugene Walter
as the American Journalist

Riccardo Guglielmi
as Guido as a Farm Boy

Marco Gemini
as Guido as a Schoolboy

Frazier Rippy
as Lay Secretary for the Cardinal

Tito Massini
as The Cardinal

Roberto Nicolisi
as Doctor at the Spa

Palma Mangini
as Aging Relative from the Country

Jérôme Polidor
as Clown in the Parade

Rossella Como
as Friend
View All

A carnival of the soul.

Marcello Mastroianni becomes an avatar for the great Italian director Federico Fellini in the surreal cinematic self-interrogation that takes place in 8 1/2.

It exerts an irresistible pull.

8 1/2 is probably the most potent movie about film-making, within which fantasy and reality are mixed without obfuscation, and there's a tough argument that belies Fellini's usual felicitous flaccidity.

In terms of execution I cannot remember a more brilliant film.

Though he can't face up to the total case, we must be grateful to Fellini for having presented so much of it, and with such flair and exuberance.

Made me prick up my eyes. After twenty minutes I began to suspect I might be in on a masterpiece, and after thirty I was sure of it.

Maybe it is a film that will grown on me over time? I'm not sure but it didn't do much for me on this watch.... Still, it does look great so I will give it that.

8 1/2 is one of the great films about filmmaking.

This is a complex and painfully honest study of a man in a personal and professional crisis.

At least half-kidding most of the time, it's a playful nervous breakdown, alight with ideas and joy.

Fellini takes his existential musings from La Dolce Vita to a radical level with this fascinatingly intimate and gorgeous exercise in self-reflection (the title couldn't be more perfect), shaping it as a stylish anti-comedy and building it upon a surprising anti-structural narrative skeleton.

Finely executed picture 8 1/2 is a splendid film experience that boasts a great cast, brilliant direction and a wonderful story. Shot in gorgeous Black &White, I felt that it added so much atmosphere to the film and in retrospect gave a much more in depth atmosphere that elevated the simple story quite well. This is a great film, one that should be seen by cinema fans, and if you enjoy classic, foreign dramas, then you're in for a real treat. I really enjoyed the film, and its premise, for what it is it's definitely of the top films that has ever been committed to film, and it's well worth your time. The story is simple, yet engaging, and it's a smartly crafted picture that delivers something truly special. 8 1/2 is a fine picture that manages to be captivating and enthralling from the first frame right up to the final shot due to the simplest of plots. Under the direction of Frederico Fellini, it is a standout feature, a film that is near perfect, and like I said, is well worth your time if you enjoy the genre. 8 1/2 works very well due to powerful performances, effective storytelling and great direction, and for what it is, it's a finely executed drama that does something quite wonderful with its story. This is a stunning picture that is enthralling from start to finish, and is one of cinemas finest films. Although at times a little long, you end up not caring because the story and performances are so rich in character that the make the weaker moments seem insignificant compared to the entire film. 8 1/2 is a stunning piece of filmmaking that will delight anyone looking for powerful, engaging storytelling, and it's a movie that is accomplished in the way it handles its subject.

A movie director is trying to make a film but he's constantly being interrupted by doubts, personal problems, flashbacks and dream sequences. This stream-of-consciousness classic shows Fellini laying out the creative process right before our eyes almost in real time; despite their superficial appearance of randomness, the scenes flow together amazingly well, and each individual segment is a flawless gem in a sparkling bracelet. The fantasy scene with Mastroianni ruling over an imaginary harem with a whip still shocks and amazes to this day.