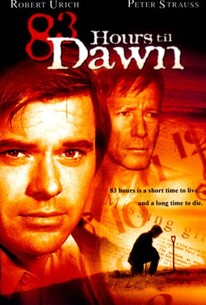 83 Hours 'Til Dawn utilizes a plot device originally seen on another fact-based TV movie, The Longest Night (1972). Robert Urich stars as a wealthy business executive whose 20-year-old daughter is abducted by sociopathic Peter Strauss. The kidnapper seals his victim in a small box and buries it deep underground, with an air-tube as her only conduit to the outside world. Strauss threatens to never reveal the girl's whereabouts unless Urich ponies up half a million dollars. The original telecast of 83 Hours 'Til Dawn ran a distant second to a competing network showing of the theatrical feature Three Men and A Baby (87).

Critic Reviews for 83 Hours 'til Dawn

There are no critic reviews yet for 83 Hours 'til Dawn. Keep checking Rotten Tomatoes for updates!

There are no featured reviews for 83 Hours 'til Dawn at this time.