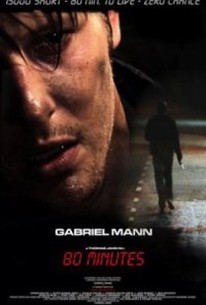 A quiet birthday celebration at home turns into a desperate race against the clock when a man is injected with poison and given eighty minutes to settle a lingering debt in Knockin' On Heaven's Door director Thomas Jahn's relentlessly tense white-knuckle thriller. Alex North is sitting at home and awaiting the arrival of his girlfriend Mona when an unexpected knock at the door reveals his old friend Walter, a likable restaurant owner who is inexplicably flanked by a pair of muscular thugs. When Alex failed to pay back the $15,000 he borrowed from Walter, he thought that his old friend would be a bit more understanding. But Walter wants his money back tonight, and in order to give Alex some incentive to work fast, he injects him with a time-release poison that will prove should an antidote fail to be administered within the next eighty minutes. Desperate, Alex races to his brother Vincent and gets into a serious car accident along the way. But the other people who were involved in the accident are none too pleased, and quickly give chase as Alex beats a hasty retreat to his brother's house. As Alex attempts to convince Vincent to give him the money that will save his life, he realizes that the police are hot on his trail as well. Not only that, but a vicious biker gang seems determined to track down Alex and his two buddies Floyd and Lloyd. Later, after seeing Lloyd shot dead by the leader of the gang, Alex manages to elude the pistol-packing bikers with a little help from Mona. Just as Alex begins to feel the effects of the poison that's currently coursing though his veins, he reaches Walter's restaurant prepared to pay off his debt. But Walter seems reluctant to accept Alex's payment. It's been quite a wild night for everyone involved, and before this debt is settled Walter has one last surprise for his old friend Alex. ~ Jason Buchanan, Rovi

There are no critic reviews yet for 80 Minutes. Keep checking Rotten Tomatoes for updates!

A very fast paced movie that grabs you and just won't let you go. The acting isn't the best, but the story wasn't all that bad. In the end, the main character really knows what he is all about and tries to put it into perspective. Could have been a lot better, but it did has some surprises along the way and wasn't totally predictable.