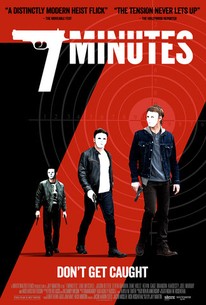 After becoming indebted to a psychopathic drug lord, three desperate young men are forced to commit a brazen robbery. What begins as a simple plan - 'in and out in seven minutes' - quickly escalates into a dangerous game of life-or-death. As each minute of the heist ticks by, true motives are revealed and unexpected twists ratchet up the stakes to a thrilling crescendo. The feature film debut from celebrated music video director Jay Martin, this stylish and fast-paced crime thriller stars Luke Mitchell (TV's AGENTS OF S.H.I.E.L.D), Jason Ritter (TV's GIRLS), Leven Rambin (TV's TRUE DETECTIVE), Kris Kristofferson (BLADE FRANCHISE, WATCHMEN), Zane Holtz (TV's FROM DUSK TILL DAWN), and Joel Murray (GOD BLESS AMERICA). (C) Starz

Kris Kristofferson
as Mr. B

Gerald Grissette
as The Wide Receiver

Tamarah Pearson
as Bunny
View All

This film is a nasty piece of work.

It's pretty hard to get worked up about three thieves this dumb and this bland.

Although stylish and intriguingly told, the twisty crime drama "7 Minutes" never quite jumps out of the pack.

Though 7 Minutes does offer an impressive array of backstories for a film that initially appears to be about three semi-interchangeable guys, most of those backstories are still dominated by clichés ...

Like most of today's young directors who neither want to nor know how to tell an actual story in a traditional way with a beginning, middle and end, writer-director Jay Martin jumps around like a spastic colon.

7 Minutes is the movie that gets that city right. The ugliness of its downtown, the blandness of its raised freeways, and the abruptness of its transitions from rural to urban and urban to rural.

[Taps] into post-Tarantino comi-crime clichés, but [updates] them with an awful, modern, bro-y vibe.

7 Minutes is a slick ride through a sexy cultural wasteland, but before the credits roll you know it won't cross your mind again.

Whether because of race, shame, shelter, or fright, 7 Minutes remains white in the face throughout.

There isn't a character here... who doesn't feel like a low-res scan of a shaky photocopy of a faded polaroid of a character in a better crime drama, none of which is helped by a plot that's too simple to generate tension even from its narrative tricks.

All the chronological hopscotch can't paper over the fact that Martin just doesn't have that much of a story to tell.

There are no featured audience reviews yet. Click the link below to see what others say about 7 Minutes!