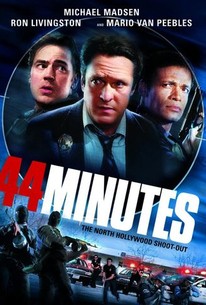 On February 28, 1997, a pair of heavily armed and heavily armored outlaws named Larry Eugene Phillips Jr. and Emil Matasarenu, who had previously cut a crooked swath throughout the Los Angeles area as "The High Incident Bandits," botched the robbery of a bank in North Hollywood. The confrontation that followed has been described as the "most intense shootout in LAPD history," with the police and several SWAT teams trading gunfire with Phillips and Matareanu for three quarters of an hour. The made-for-cable 44 Minutes: The North Hollywood Shootout is an intense reenactment of this bloody incident, with Andrew Bryniarski and Oleg Taktarov as the bandits, and Michael Madsen, Ron Livingston, and Mario Van Peebles representing the forces of law and order. The final moments of the film includes on-the-spot video coverage of the actual incident. 44 Minutes: The North Hollywood Shootout originally aired over the FX network on June 1, 2003.

Katrina Law
as Kate
View All

Apart from the interview interruptions, one cannot fault the way the actual shoot-out is handled in the film....

Stays true to the real-life incident of the North Hollywood LAPD shootout.