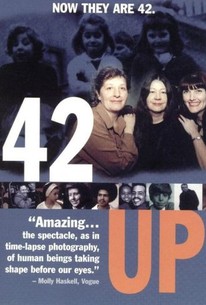 Michael Apted's renowned series tests the maxim by returning every seven years to 14 British children originally profiled in 7 UP (1964). He began the series seeking to confirm the class distinctions were alive and well in England. And while their accents are a dead give-away as to who studied ballet and who drives a cab, there are also remarkable similarities--as youth gives way to middle-age, parents die, and children prepare to leave the nest.

Critic Reviews for 42 Up

Their largely negative or only superficially positive responses make me feel guilty about finding the series so fascinating -- and should make the filmmakers feel even guiltier.

On some level, 42 Up is a startling home-movie time capsule. Simply to behold the aging process with such intimacy is enough to give you a shudder.

One of the best movie series ever is a true-life drama like no other. Miss it at your peril.

As beneficial as helmer's influence may be to that aging franchise, his work here reps a fascinating use of the docu form.

When this hugely ambitious project began, it was a longitudinal study of class divisions among English schoolchildren. But time and persistence have turned it into much more.

This series should be sealed in a time capsule. It is on my list of the 10 greatest films of all time, and is a noble use of the medium.

42 Up is a delightful and moving look at humanity through the singular stories of this captivating group.

Part of Apted seminal docu series that began with 7Up, then 14, 28, and 35, this chapter centers on the subjects as they head into middle-age, with all its compromises and disappointments.

Two subjects acknowledge their conjoined lifeline, become best friends, and as a result a life is forever changed.

This movie is a living artifact that does what movies do best: exist in time. May this series continue up, up, and beyond.

This series remains as fascinating as it did when it started - a lifetime ago.

Audience Reviews for 42 Up

A surprising installment in the Up Series for those who don't believe you can change your life (sometimes quite radically, I would say) after you're 35 - and right when you think you have seen it all, things get even more interesting and impressive as we approach the end of the film.

One in the series of the greatest documentary ever made.

It continues. We are still missing three of the "kids" as one who came back last time dropped out again and one that was missing in the last installment has returned. As the folks head into the middle years of their lives they all seem to be leveling out. Sure there were hard times but they have managed to overcome them and find a balance on which to live. Relationships have come and gone and the one thing that is evident as we continue on the journey of life with these people is that no matter the social standing you are in life will always be chaos. Nothing will be as you see it for yourself. It was nice to see one of the gentlemen who was having a hard time at life seems to be on the track to a better life. The ones that have managed to stay married after all this time give you hope that not all of the "kids" marriages are going to end up like much of their parents. As I started this installment I did have a nice reaction of It's-good-to-see-these-people-again that I enjoy.

Great series, have really enjoyed all these movies.