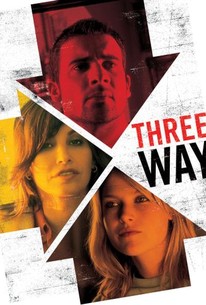 In this noir-flavored drama, Lew (Dominic Purcell) is a man who has moved to a small dusty town hoping to get away from things after his wife dies under mysterious circumstances. One night, Lew overhears a young couple, Ralph (Desmond Harrington) and Isobel (Ali Larter), discussing plans to stage a kidnapping of Ralph's wife, Florence (Gina Gershon), who comes from a wealthy family. Imagining he's found his way into a big score, Lew approaches Ralph and Isobel and tells them they can either cut him in on the plan, or he'll turn them in to the police; however, after Lew and his girlfriend, Rita (Joy Bryant), nab the victim, they begin to suspect that Florence has something up her sleeve. Adding to Lew's presence is the arrival of a stranger (Dwight Yoakam), who claims to have incriminating information about the death of Lew's wife. Released as both Three Way and Three Way Split, the film was based on the novel Wild to Possess, a classic pulp thriller by Gil Brewer.

Great film! Once again, Gina Gershon has outdone herself. Fantastic!