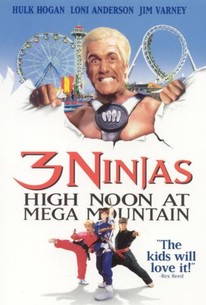 This is the fourth in the 3 Ninjas action-adventure series with retired ninja Grandpa Mori (Victor Wong) as the connective device linking all four films. Following the low-rent 3 Ninjas Knuckle Up (a 1992 production which went unreleased until 1995), the fourth boosts the budget and features three new lead youngsters plus assorted "guest stars." Grandpa Mori teaches martial arts to his three grandchildren: 15-year-old Rocky (Mathew Botuchis), 14-year-old Colt (Michael J. O'Laskey II), and 8-year-old Tum Tum (J.P. Roeske II). On a trip to the Mega Mountain amusement park, the three boys are joined by their computer genius neighbor, 13-year-old Amanda (Chelsey Earlywine), daughter of a movie special FX designer. The villainous Medusa (Loni Anderson) leads a ninja army to Mega Mountain. With her head henchman Lothar (Jim Varney), Medusa intends to move into Mega Mountain's master control center and hold the park patrons for a $10 million ransom. However, former TV star Dave Dragon (Hulk Hogan) happens to be making an appearance at the park, and the combination of Dave, Rocky, Colt, Tum Tum, and Amanda makes life difficult for Medusa and her warriors.

Things are in a pretty sad state when Hulk Hogan gives a movie's most touching performance.

The franchise is losing altitude fast.

Abrasively loud, gratingly acted, appallingly directed and without a moral core, this "3 Ninjas" also boasts a screenplay with the most "Unhhhs" of the decade, that exquisite sound you make when trying to anihilate another human with your foot or a karate

Where to begin? I only saw this movie because my little brother wanted to rent it when he was 10, and was really into the whole ninja thing (this was during the peak of the TMNT era). This movie has some of the worst acting, worst dialogue and editing I've ever seen. Only way to enjoy it is to see it as a parody, which it unfortunately isn't. Hulk Hogan should stick to wrestling or retire or something. Wanna know what a ninja is? Watch Batman Begins or some decent anime. This is just a big waste of time and the single worst movie I've ever seen.

I only saw this movie because a younger sibling was watching it. I didn't want to see it really, and I regret watching it. I'm glad they've stopped making the 3 ninjas movies.

Yes. I bought the DVD and gave it a high rating. Don't hate me. The reason for the rating and the fact I bought it was because of Jim Varney. He does an excellent job as Lothar Zogg and is sexy to boot. Before we all start hating on Hulk Hogan, let's take a look at Loni Anderson who, by far, takes the 'Most Wooden Performance Award' of the century. She was not convincing at all as Medusa and if this is a kids' movie, why was she wearing that skanky outfit? She was much better on 'WKRP in Cinncinati'. Mr. Varney steals the show and I would've been happy to see him in every scene. He truly oustshines the entire cast, including the three ninjas themselves. I was actually rooting for Lothar to be successful in his mission. Tum Tum's yells started grating on my nerves after a while. Medusa's nephews, where do I start? How did they ever break into the theme park? All, but Lothar, didn't have the intelligence to do such a thing. Ok, Victor Wong was great, too. Maybe if Varney had cast and directed this movie, it wouldn't have flopped. Only Varney seemed to give 100% to his role. The rest? Well, I would've been satisfied if it was a one man show staring Varney. Oh, wait, I have his commercials. Now, that's worth watching repeatedly. If you're really, truly a fan of Varney's then you might want to get this simply for him and in his memory. If not, leave it in the bin.

The 3 Ninjas have lost all their magic by now, and the new actors don't help