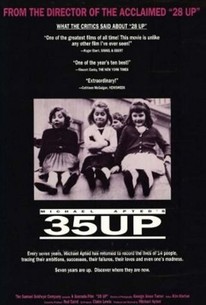 In 1963, director Michael Apted and then-partner Paul Almond chronicled the lives of 14 seven-year-olds for British television; they returned to the same group at intervals of seven years for updates, of which this is the fifth. It's possible to watch this film without having seen the other chapters (28 Up and 42 Up are the only other installments in circulation), because Apted offers thumbnail flashbacks with each interview. Several of the original subjects declined to be filmed for 35 Up (the film acknowledges them with reference to their most recent appearance in the series), and several others express ambivalence about participating. Two trios of friends from the original film -- John, Andrew, and Charles, and Jackie, Lynn, and Sue -- are interviewed collectively; the women seem to be still close, but it's not clear if the men are. Most of the subjects are married and raising children (and most have moved from London to the suburbs or the country); there are a few divorces, and one woman has chosen to be a single parent. The film saves its most fascinating figure, Neil, for last. In 28 Up, he was a university dropout, living a nomadic existence on the coast of Scotland. In the present film, he has moved to the Shetland Islands, where he's involved in local theater and taking medications for his psychological illness.

Critic Reviews for 35 Up

There's certainly plenty of food for thought here, but most of it is served raw rather than cooked -- most of the significance of the development of faces, physiques, aspirations, and attitudes over three decades is left to the subjects themselves.

[35 Up] finds this series growing increasingly rueful with age.

The latest installment in the most engrossing long-distance documentary project in the history of film.

It's a brilliant, vital human document.

The film's realism is as ruthless as it is low-key. It's impossible not to look at the 35-year-old woman and mourn the loss of the 7-year-old girl.

35 Up is a God-like glimpse of the uninterrupted trajectory of lives that is vastly disturbing, cooly scientific and intensely emotional.

Part of Apted's seminal series that began with 7Up, this segment has different dynamics, emphasizing the children of the subjects and the deaths of their parents, showing stronmg evidence of the life cycle.

Another engrossing entry in a groundbreaking series.

The remaining participants grapple with disillusionment, their reconcilement of the past, and their relationship to their own children.

35 Up is about life, real life from childhood through adulthood.

Most people will feel the start of tears at unpredictable points in this movie. They come from compassion and sympathy in the truest sense of those words -- we identify with these people living their lives as best as they can.

Audience Reviews for 35 Up

At first, the impression is that this is more of the same following what we saw in 28 Up, with very basic questions about work, marriage and family, but then the film grows much more interesting as it begins to take a deeper look into the complexities and nuances of those people's lives.

Perhaps I should review Apted's series in its totality but each of these films has their uniqueness and charms. This one is no exception although some of the children who were originally filmed in 1963 declined to be in this and subsequent series. Lives are falling a bit apart for our subjects. All the more reason to get updated in 42 Up.

This series is great. Well worth watching from the start, but maybe with a few month's worth of rest between each film (unlike what I did) otherwise the flashbacks get a bit much. By 35 up I was starting to feel like it was all flashback and no current footage.

We see one of the "kids" come back that had chosen not to participate in the last installment and two more drop out without a word. So we have lost three total at this point. It's a weird thing to see these films one right after the other as the idea that so much time has passed for these people is hard to wrap my mind around. It's easy to be lost in the thought that these are not real people but characters in a movie. They are just really good at casting young people that look like the older people. The fact that we get to see the span of these lives is something rare in cinema and I don't think people should miss out on this. Ask yourself some of the questions they get asked and see if you are not any different from some of them. Another thing we get a look at are the marriages. In the last installment we saw most of them married and some even having kids. In this one we get to see if the marriages survived. Some did... some didn't. The year is 1990 and we are soon going to be in a very modern setting and I still am wondering where the folks will be as the tech and society takes the big leap that is coming soon.