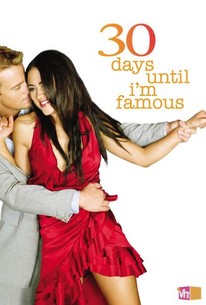 In this satirically witty look at the entertainment industry, Cole (Sean Patrick Flanery) is a record company executive who makes a wager with one of his colleagues that he can take anyone off the street and turn him or her into a star. Enter Maggie Moreno (Camille Guaty), an attractive woman with no outwardly visible talent who becomes the subject of Cole's experiment. In less than a month, he subjects her to music lessons, dance lessons, and a makeover so she'll seem "more Latin" while setting the hype machine in action to make the world aware of the emergence of a new star. But Maggie becomes increasingly unsure if she wants to be a star, especially at the expense of her own identity, while Cole has misgivings of his own when he begins to fall for Maggie. 30 Days Until I'm Famous also features Udo Kier and Alanna Ubach; Scott Stapp and Carmen Electra have cameo roles as themselves.

Lauren Tom
as Carla
View All

...a sporadically passable yet hopelessly underwhelming piece of work that's unlikely to pass muster with even the most easygoing of romcom fans.

There are no featured reviews for 30 Days Until I'm Famous at this time.