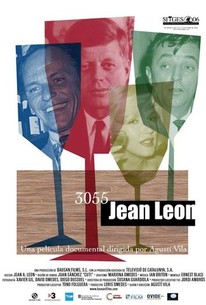 Documentary filmmaker Agusti Vila explores the enigma of the man who left Spain as Ceferino Carrión, and took on the name Jean Leon upon arriving in Los Angeles and transforming himself time and again. Who is Jean Leon? Is he a simple taxi driver, the waiter who served Frank Sinatra, the owner of Beverly Hills' legendary La Scala restaurant, or perhaps the man who served Marilyn Monroe her final meal? In this film, the mystery of Jean Leon gradually comes into focus thanks to the keen insight of such Hollywood insiders as Angie Dickinson, Paul Newman, Dennis Hopper, and Robert Wagner, among others. ~ Jason Buchanan, Rovi

There are no critic reviews yet for 3055 Jean Leon. Keep checking Rotten Tomatoes for updates!

There are no featured reviews for 3055 Jean Leon at this time.