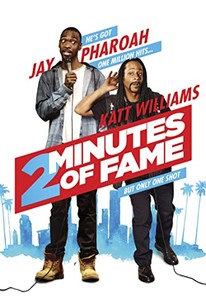 After his impressions of a comedian named Marques (Katt Williams) make him an online sensation, Deandre (Jay Pharoah) goes to L.A. with dreams of stand-up stardom. But his girlfriend (Keke Palmer) needs him to be a stand-up guy and help raise their young son. Marques, the reigning king of comedy, isn't about to give up his throne, and plots a rude-and hilarious-awakening for Deandre in this laugh-out-loud comedy with a heart.

Critic Reviews for 2 Minutes of Fame

It's hard to root for this [character] to succeed. I think the film sets up a lot of interesting questions and then just softballs it with a happy ending.

Despite being very predictable, [the movie] has an endearing sweetness at the core of its raunchy humor ... The movie gives a better-than-expected look at stand-up comedy on the nightclub level ... that will keep viewers reasonably entertained.

There are no featured reviews for 2 Minutes of Fame at this time.