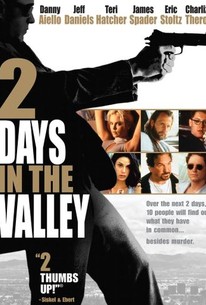 Critics Consensus: A labyrinthine thriller with a host of memorable characters, 2 Days in the Valley is an uneven but intriguing thriller/black comedy.

Critics Consensus: A labyrinthine thriller with a host of memorable characters, 2 Days in the Valley is an uneven but intriguing thriller/black comedy.

Critic Consensus: A labyrinthine thriller with a host of memorable characters, 2 Days in the Valley is an uneven but intriguing thriller/black comedy.

2 Days in the Valley Photos

A variety of crooks, losers, and working stiffs living in the shadow of Hollywood find their various personal crises overlapping in this intricately woven melodrama. Lee Woods (James Spader) is a cold-blooded hit man and Dosmo Pizzo (Danny Aiello) a soft-at-heart gangster; they've been sent to murder Roy Foxx (Peter Horton), the former husband of also-ran Olympic skier Becky Foxx (Teri Hatcher). Lee's girlfriend Helga (Charlize Theron) is unhappy about his habit of killing people, and she attracts the attention of Alvin (Jeff Daniels) and Wes (Eric Stoltz), two cops who've been put on vice detail but don't have the heart to bust the prostitute they've been trailing. Alvin dreams of becoming a homicide detective, so when he discovers that he might be on the trail of a murder, it's like Santa Claus showed up in mid-July to hand him a present. Dosmo manages to escape the crime scene, only to foil a murder attempt by Lee, forcing him to hide out in the home of Hopper, a pretentious English art dealer (Greg Cruttwell), whom Dosmo holds hostage along with Hopper's long-suffering assistant, Susan (Glenne Headly). In the midst of all this, a down-on-his-luck television director (Paul Mazursky) contemplates suicide (the main stumbling block is finding someone to take care of his dog) while also being pestered by an actor with equally bad luck (Austin Pendleton) and meeting a compassionate nurse (Marsha Mason) on a visit to a cemetery. ~ Mark Deming, Rovi

William Stanton
as Man At Bar

Coby
as Bogey, A Dog

Mark Goldstein
as Marc the Pitbull

News & Interviews for 2 Days in the Valley

View All 2 Days in the Valley News

Critic Reviews for 2 Days in the Valley

To the director's credit, the actors all seem responsive to his touch, giving performances that are lively and flavorsome, if not deep or unlike anything each of them has done before.

Herzfeld has a tolerable eye for filling a 'Scope frame but a tin ear when it comes to creating dialogue; these are all characters we've met before, and most even seem bored with themselves.

Smoothly constructed, for such a busy piece of work, and Hatcher's ascent to stardom continues.

A sleek, amusingly nasty screen debut by a film maker whose television credits include an Amy Fisher docudrama.

Funny, pathetic, sad, absurdist -- writer-director John Herzfeld plays it any number of ways, and makes them all work.

There are too many characters, but some are a lot of fun. The tone shifts, from graphic murder to wig-flipping farce, are too extreme, but much of it works.

A sharp, smart movie peppered with A-grade performances from its B-list cast.

It's not that this is a bad, blackly comic slice-of-lowlife: It's just that you've just seen it all before.

A quirky, multi-character collage that skillfully keeps you off balance, not knowing where it's headed.

One constant is its lovely cinematography. Another is its utter insignificance.

When the highlight of your movie is a catfight between Teri Hatcher and Charlize Theron...well, it's not necessarily a bad thing, but it couldve been better

Audience Reviews for 2 Days in the Valley

AA great movie. Somehow I have run into a string of movies lately where the lives of about 6 people all intertwine with each other during the movie. This one is the best of all. Danny Aiello plays an excellent part, along with Paul Mazursky. What we have is a divorced couple, and the wife pays to have her husband killed, which sets of a sequence of events that not only are comical but also suspenseful at times. The Sound Track helps make this a 5 star movie. get it anyway you can, its excellent. 5 STARS

this movies kicks ass on many levels

James Spader makes this film by far. Too bad Teri Hatcher is in it.

2 Days in the Valley Quotes