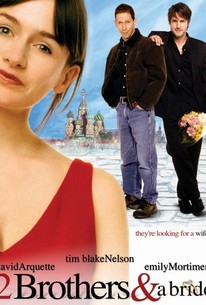 Two men look for a wife -- just one will do, thank you -- in this offbeat comedy. Jake (Tim Blake Nelson) and Josh (David Arquette) are two brothers who live and work in a vegetable farm somewhere in the Midwest, where they're looked after by their Ma (Lois Smith), who cooks, cleans, and keeps the guys company. When Ma dies, Jake and Josh find they're a bit lonely all by their lonesome, and more importantly, they're not much good at everyday domestic activities, so they decide to do the sensible thing -- one of them will get married so they'll have someone else to talk to and handle things in the kitchen and the laundry room. Woefully naïve, socially clumsy, and less interested in romance than day-to-day practicalities, Jake and Josh decide to head out on a matchmaking tour to St. Petersburg, Russia, where they're promised introductions to hundreds of women over the space of two weeks, in hopes that they'll find an understanding, old-fashioned wife who doesn't mind having a third wheel around at all times. A Foreign Affair was shot on location in St. Petersburg in the former Soviet Union, and in Chihuahua, Mexico, which stood in for the United States.

Critic Reviews for 2 Brothers & a Bride

It's Tim Blake Nelson's character who keeps the plot from spinning out of control, because he has a natural and unforced respect for these women that he yanks his brother's chain and keeps their mission on course.

Spirited indie film that could be improved by a gifted editor.

Neither funny enough to be a comedy nor serious enough to pass for drama.

This is one case where the director would have been better off pointing his camera at real subjects. The truth, in this case, is almost sure to be stranger than the fiction.

For those who are easily pleased.

Nelson's charisma keeps the film watchable, but there are few laughs or surprises.

In the end, it's not going to bother anyone, and it's funnier than it has a right to be. Just don't expect real comedic insight into the ways human beings stumble into love.

A Foreign Affair is an altogether enjoyable diversion, a light and clever comedy that offers some great performances in a unique setting. Plus it's about ten times more sincere and entertaining than what passes for romantic comedy these days.

Audience Reviews for 2 Brothers & a Bride

I really, really liked this movie. It is not a laugh out loud kind of comedy, It is a subtle, humorous look at two brothers' quest in finding a wife in another country. It was nicely done, well acted, and very charming. AND I am not a David Arquette fan by ANY stretch of the imagination, but I really liked him in this.