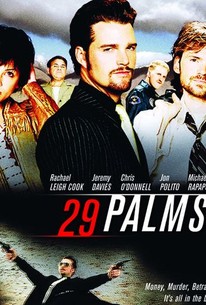 Leonardo Ricagni, director of the 1998 Uruguayan comedy El Chevrolé, helmed this straight-to-video ensemble crime thriller, in which the main character is a bag of money. Initially belonging to a casino on an Indian reservation, The Chief (Russell Means) hires The Hitman (Chris O'Donnell) to track the bag down when it turns up missing. As The Hitman gets closer and closer to finding it, the bag of dough passes through the hands of several other nameless characters, including The Waitress, played by Rachael Leigh Cook, The Drifter, played by Jeremy Davies, and The Sheriff, played by Keith David. Before hitting American video-store shelves in 2003, 29 Palms screened at the München Fantasy Filmfest and the Cologne Fantasy Film Festival, both in Germany. The film should not be confused with the 2004 Bruno Dumont picture of the same name.

Rachael Leigh Cook
as The Waitress

Jeremy Davies
as The Drifter

Keith David
as The Sheriff

Chris O'Donnell
as The Hitman

Michael Rapaport
as The Cop

Michael Lerner
as The Judge

Jon Polito
as The Security Guard

Kevin Sifuentes
as The Head of Security

Carlos Mencia
as Comic
View All

Not a good date movie.

a morass of stolen plot points

There are no featured audience reviews yet. Click the link below to see what others say about 29 Palms!