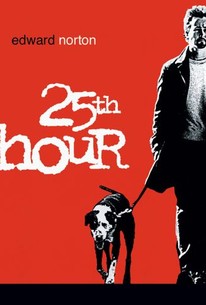 Critics Consensus: An intelligent and well-acted film despite the usual Spike Lee excesses.

Critics Consensus: An intelligent and well-acted film despite the usual Spike Lee excesses.

Critic Consensus: An intelligent and well-acted film despite the usual Spike Lee excesses.

The clock is ticking on Monty Brogan's freedom--in 24 hours he goes to prison for seven long years. Once a king of Manhattan, Monty is about to say goodbye to the life he knew--a life that opened doors in New York's swankiest clubs but also alienated him from the people closest to him. In his last day on the outside, Monty tries to reconnect with his father, who's never given up on his son, and gets together with his two closest friends from the old days, Jacob and Slaughtery. Also in the mix is his girlfriend, Naturelle, who (or might not) have been the one who tipped off the cops. Monty's not sure of much these days. But with time running out, there are a lot of choices to be made.

Brad Williams
as Trader No.1

Rodney "Bear" Jackson
as Trader No. 2

Igor Zhivotovsky
as Russian Hood No. 2

Lawrence Bullock
as Chelsea Man No. 1

Patrick Illig
as Chelsea Man No. 2

Jamil Mullen
as Lady with Baby

It's an odd movie, maybe odder than it should have been if this is Lee's attempt to make a more widely accessible, less issue-based movie.

While 25th Hour has a several arresting characters struggling with credible problems, regrettably Monty isn't one of them.

Superbly acted, as you would expect, it's also rich in moral nuance. Doing the right thing is not as simple in his films as it once was.

25th Hour is the first film I've seen that explicitly catches the grief of New York City in the aftermath of 9/11.

This sprawling and ecletic work from Spike Lee has, in a sense, more going for it in the ragged fringes of its story than in its slightly awkward, pre-determined centre.

A reminder of how human beings can lose their humanity in the face of grief and tragedy but can find it again through helping others rather than turning a blind eye. It's an important work of art.

If you're in any way a Spike Lee fan, check this out.

Profoundly suffused with an aura of loss.

there is still plenty of angst saturating the film

With an overly depressing color palette, awfully jumpy editing, subplots that go nowhere and an ubiquitous melancholy music that never stops for a second, Spike Lee overloads his film and seems desperate to drag us into a bottomless abyss of sadness at nearly all costs.

A riveting, hard hitting look on the life of a soon to be con (Edward Norton), and his final day of freedom as he spends it with his childhood friends (Barry Pepper and Philip Seymour Hoffman) and girlfriend (Rosario Dawson), as he tries to uncover who ratted him out on selling drugs that landed him a 7-year sentence. Norton, one of the best actors on the planet, is spellbinding, and a terrific supporting cast to go along with the fantastic storytelling of Brian Cox near the end makes it a knockout. For those who love films that effortlessly detail their characters, who we come to care for, this is a movie for you. The ending is one of the most unique I can recall, and the ambiguous nature of it is really haunting stuff.

Spike Lee is a tremendous filmmaker. Sure, he can be a little overzealous and his politics can be stifling, but it's sort of tragic how he's seemingly more known for his controversial subject matter than he is for being an outstanding (and important) director. Indeed, he is one of very few who can simultaneously pull off being a sound visual stylist and a thorough storyteller. Next to Do The Right Thing, there may be no better example of this than 25th Hour. One of the first American movies explicitly set in New York after 9/11, this film is based on a novel by David Benioff (who also wrote the screenplay) that was published well before the attacks. In any case, their aftermath is not so much the topic of Mr. Lee's movie as an important element of its atmosphere. In one of the film's most memorable scenes, two characters talk in an apartment overlooking ground zero, whose floodlighted glare and somber activity make it impossible to concentrate on the dialogue: a case of reality overwhelming fiction. There are also more subtle nods to the aftermath of those horrific events, but Lee smartly doesn't ovedo it; he uses the sociopolitical landscape of a post-9/11 America to great effect here, weaving it into the fabric of his story as a means to enhance, not distract. Undoubtedly, the show-stopping scene in the film is a moment when Monty (Edward Nortion), staring into a men's room mirror, launches into a profane tirade against his fellow New Yorkers (and everyone else). His rage is impressively ecumenical, encompassing blacks, brutal police officers, gays, Osama bin Laden, the rich, the poor and every other ethnic or social type you can think of: all of them put down with ruthless, scabrous precision. Obviously the sequence is very reminiscent of a similar scene in Do The Right Thing, but surprisingly, it's equally as effective here as it was back then (which could be viewed as a powerful statement on how little progress we've made over the years). Of course I'd be remiss if I didn't mention the brilliantly ambiguous ending. It is Lee's mission statement that this isn't a film about a plot, with a beginning, middle, and end. This is an imprint of the isolated times we live in. Who are we as a people? How do we define ourselves in relation to others? The whole film plays in a subdued, almost depressing tone. There are no laughs to be had, no falsely engineered moments where the characters break bread, and cry, and get all remorseful -- none of that. We feel as Monty feels: perplexed, distressed, unsure of those things to come and angry for how he happened to arrive at this place, and moment, in his life -- his last 25 hours.

During the early to mid-1990's Spike Lee was a director who could do no wrong in my eyes. His films were of a very high calibre and then he hit a dip in form, seemingly never recovering. This however, was a reminder of how good he can be. Based on the novel by David Benioff - who also wrote the screenplay, it tells the story of Monty Brogan (Edward Norton) a Manhattan drug dealer who has to confront the choices he has made in life on his last day before serving a seven-year prison sentence. He spends his last 24hours of freedom with his girlfriend Naturelle (Rosario Dawson) his father (Brian Cox) and his two best friends Frank (Barry Pepper) and Jake (Philip Seymour Hoffman), all the while determining who really sold him out. This is a Spike Lee "joint" I don't mind taking a hit off, at all. Filled with very intense and dramatic conversations and confrontations between the characters, delivered with superb performances. Norton and Hoffman have already cemented their reputations but Pepper is a highly under-rated actor that I predict will be winning awards very soon with the quality he consistantly delivers. It's a real joy to watch them bounce off each other, adding real gravitas to some well written dialogue. Lee's direction is also up close and personal, giving it a further sense of realism. The post 9/11 psyche of New Yorkers is a running theme throughout and even one scene has two characters overlooking ground-zero as they discuss the end of an era. Lee also explores the multi-cultural diversity of the city, like he has done previously in "Do The Right Thing" and "Jungle Fever", among others. The diversity is also played out in the three friends, with very different values. It's an ambitious film with nearly every other scene or character, subtly displaying metaphor for the fragile state of the city they inhabit. Despite a running time that slightly overstays it's welcome, this is a highly charged and thought-provoking allegory of capitalist America and boasts three superlative, indefatigable performances from Norton, Pepper & Hoffman.