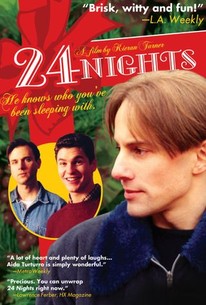 What do you call a 24-year-old gay man who still believes in Santa Claus? In this film, you call him Jonathan Parker. Jonathan met a Salvation Army Santa when he was four, and the experience had so profound an effect that he's never lost his unwavering faith in Saint Nick.

Polly Humphreys
as Elf
View All

A gay romantic comedy that's amateurish in both the negative and positive senses of the term.

There are no featured audience reviews yet. Click the link below to see what others say about 24 Nights!