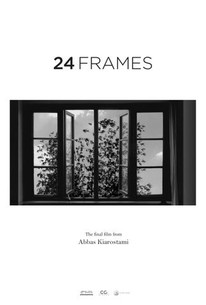 Critics Consensus: 24 Frames offers Kiarostami fans one final, affecting reminder of what made this filmmaker a talent to treasure.

Critics Consensus: 24 Frames offers Kiarostami fans one final, affecting reminder of what made this filmmaker a talent to treasure.

Critic Consensus: 24 Frames offers Kiarostami fans one final, affecting reminder of what made this filmmaker a talent to treasure.

For what would prove to be his final film, Iranian director AbbasKiarostami gave himself a challenge: to create a dialogue between hiswork as a filmmaker and his work as a photographer, bridging the twoart forms to which he had dedicated his life. Setting out toreconstruct the moments immediately before and after a photograph istaken, Kiarostami selected twenty-four still images, most of them starklandscapes inhabited only by foraging birds and other wildlife, and digitally animated them into subtly evolving four-and-a-half-minutevignettes, creating a series of poignant studies in movement,perception, and time. A sustained meditation on the process of imagemaking, 24 Frames is a graceful and elegiac farewell from one of thegiants of world cinema.

"24 Frames" is slow cinema at its slowest, and as meaningful as you want to make it. Above all, it breathes with the sensibility of an artist who saw beauty in people and places where most of us never thought to look.

The chief pleasure of 24 Frames is how it attunes you to appreciate any movement, whether it's snow falling, waves crashing, or birds pecking the earth.

24 Frames immediately communicates the power of the theater experience, in the way that so many of Kiarostami's movies can.

In the seconds and minutes around the taking of a photograph, Kiarostami reminds us, the world changes, but mostly in increments.

"24 Frames" can't help but be affecting because it is Kiarostami's final movie. But it's intellectually uninvolving, and its technical limitations prove frustrating.

How fitting that this lovely final film is one that could be enjoyed by fourth-graders as easily as the most knowledgeable of Kiarostami's admirers.

Breathtaking and transfixing. There is a sadness to 24 FRAMES, but it's never a tragedy.

Although 24 Frames is attractive to the eyes and senses, it requires patience since there are no characters or even a plot to follow.

24 Frames drags for five minutes for each of its 24 'frames', choking its simple concept into a torturous two-hour slog.

[Kiarostami's] love for cinema was still as vibrant and adventurous as ever, and in a way, this film is how he is passing the torch to us. Training our eye, making us look, experimenting with technology and form -- it's all there.

I felt like I was watching Kiarostami's failed experiments rather than his successes.

The repetitiveness of concentrating on watching [the frames]...is like quiet meditation on the power of the image. The cumulative effect is a mesmerising insight into Kiarostami's creative process.

There are no featured reviews for 24 Frames at this time.