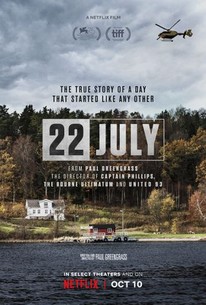 Critics Consensus: 22 July offers a hard-hitting close-up look at the aftereffects of terrorism, telling a story with a thriller's visceral impact and the lingering emotional resonance of a drama.

Critics Consensus: 22 July offers a hard-hitting close-up look at the aftereffects of terrorism, telling a story with a thriller's visceral impact and the lingering emotional resonance of a drama.

Critic Consensus: 22 July offers a hard-hitting close-up look at the aftereffects of terrorism, telling a story with a thriller's visceral impact and the lingering emotional resonance of a drama.

In 22 July, Academy Award-nominated filmmaker Paul Greengrass (Captain Phillips, United 93) tells the true story of the aftermath of Norway's deadliest terrorist attack. On 22 July 2011, 77 people were killed when a far-right extremist detonated a car bomb in Oslo before carrying out a mass shooting at a leadership camp for teens. 22 July uses the lens of one survivor's physical and emotional journey to portray the country's path to healing and reconciliation.

Thorbjørn Harr
as Sveinn Are Hanssen

It gives this evil man the spotlight and platform he so clearly craves. And as much as Greengrass is aware of this conundrum, he never quite figures out a solution.

The film is about atmosphere and anger, and Greengrass achieves that effect through tight focus on individuals. But the result is imperfect, because it elides crucial elements of the whole story.

Paul Greengrass' gritty, live-wire directing style is something of a trademark, and it's put to efficient use in 22 July, a layered, dense look at the savage terrorist attack that rocked Norway on that date in 2011.

Director Paul Greengrass' latest docudrama re-enacts the 2011 massacre in Norway with chilling accuracy - but stumbles when revisiting the details of the aftermath.

Fiction that hews close to fact, the movie is serious and meticulous, yet hollow.

What a perverse niche Paul Greengrass has carved out for himself.

[Paul] Greengrass spends much of his movie focusing on the recovery and healing of one of Breivik's victims. It's deeply humanist and necessary.

Greengrass knows how to create a visceral cinematic experience. The way he shoots and cuts, so effortlessly dynamic and real, puts you right in the middle of the tragedy.

The Director presents this incredibly well documented re-creation of the devastating events of 22 July politically and emotionally.

A fine film covering an inexplicably horrible tragedy from Greengrass which succeeds despite the choices regarding language, both cinematic and spoken.

It is a gripping, nail-biting thriller that delivers all the drama needed to keep audiences riveted, while giving a final glimmer of hope for good to beat out evil.

Here is a truly miserable film that we could only hope was fiction.

The film does a fine job recounting Breivik's attacks and their aftermath in its first half, but then it gets lost trying to appeal to our emotions with snowmobile cliches and easy sentimentality as it focuses its climax on a witness that doesn't prove anything about Breivik's sanity.