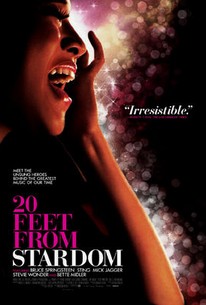 Critics Consensus: Rich, insightful, and occasionally heartbreaking, 20 Feet From Stardom is an energetic tribute to the passion, talent, and hard work of backup singers.

Critics Consensus: Rich, insightful, and occasionally heartbreaking, 20 Feet From Stardom is an energetic tribute to the passion, talent, and hard work of backup singers.

Critic Consensus: Rich, insightful, and occasionally heartbreaking, 20 Feet From Stardom is an energetic tribute to the passion, talent, and hard work of backup singers.

Millions know their voices, but no one knows their names. In his compelling new film 20 FEET FROM STARDOM, award-winning director Morgan Neville shines a spotlight on the untold true story of the backup singers behind some of the greatest musical legends of the 21st century. Triumphant and heartbreaking in equal measure, the film is both a tribute to the unsung voices who brought shape and style to popular music and a reflection on the conflicts, sacrifices and rewards of a career spent harmonizing with others. These gifted artists span a range of styles, genres and eras of popular music, but each has a uniquely fascinating and personal story to share of life spent in the shadows of superstardom. Along with rare archival footage and a peerless soundtrack, 20 FEET FROM STARDOM boasts intimate interviews with Bruce Springsteen, Stevie Wonder, Mick Jagger and Sting to name just a few. However, these world-famous figures take a backseat to the diverse array of backup singers whose lives and stories take center stage in the film. (c) TWC-Radius

News & Interviews for 20 Feet From Stardom

Now Streaming: Ride Along and The Secret Life of Walter Mitty
Critics Consensus: Man of Steel Is Up, Up, and Okay

View All 20 Feet From Stardom News

Critic Reviews for 20 Feet From Stardom

Artists including Mick Jagger talk about their backing singers -- and the soundtrack is, of course, heavenly.

20 Feet from Stardom, this year's Oscar-winner for Best Documentary, is both rousing, upbeat fare... and a film steeped in a strange sense of yearning and regret.

An enjoyable arts feature with its heart in the right place ...

Such a great idea for a documentary, and such a surprise to realise that it has never been done before.

This is a musical field of dreams high in corn, but also, sometimes, in the epiphanic empowerment and wonder of stardom conferred.

A warm and fitting tribute to talented singers.

The movie pays a long-overdue tribute to their glorious pipes, but also engages with the disconnection between talent and stardom, and while it isn't exactly an exposé of the music industry, infuriating details emerge.

It is a bit ironic that the film we could have seen is somewhere to the side of this one, probably no more than 20 feet away.

Both a sight for sore eyes, and a clearing of blocked ears.

No murders or revolutions necessary in this well-constructed and moving exploration of great talents who deserve their dues.

The Oscar-nominated documentary 20 Feet From Stardom attempts to right this injustice by focusing on [Merry] Clayton and a number of other backup singers whose voices we know, but whose names we often do not.

The parade of incredible women, the stream of songs you won't believe they sang on, and those irresistible voices belting out keep the rhythm going through the schmaltz, even if the conductor seems to have dropped his hymn book.

Audience Reviews for 20 Feet From Stardom

An interesting and occasionally poignant insight into the work of these talented artists unfairly neglected in the background of fame, even if the rather clumsy editing also makes it a bit hard for us to keep our interest for too long, as it scatters their stories together.

Entertaining look at the world of backup singers, "20 Feet From Stardom" is a treat. The best moments are when the performers' faces are in full frame as they listen to their old recording - the memories flying in their minds. The documentary touches on the highs and the lows of the music business for these performers and never fails to entertain. The only issue with "Stardom" is how it jumps from interview to interview leaving very little time for facts to sink in and to settle - you get to know the major players but the minor players that are extensively interviews aren't given much chance to connect. Yet "20 Feet From Stardom" proves to be an in-tune documentary that proudly wears its heart on its sleeve.

Following the lives of background singers of famous artists from the past, "20 Feet From Stardom" is a very inspirational documentary that tells you that whatever your dreams may be, nothing is impossible and you always have to start somewhere, even if that somewhere seems to be getting you nowhere. Sure, the film does not have much of a linear story to follow, but it is more of a feel-good series of stories that drives this pictures to be loved by all. I did not love watching this film as some probably will, but I really really enjoyed it. This film gives me motivation to continue pursuing my passion and not to accept just any job forever. This is a very well-made documentary. A great contender for the Oscars.

20 Feet From Stardom is a terrific documentary on backup singers that have sung with some of music's greatest artists. This film features terrific interviews from famous backup singers that tell their story. These women are very talented, every one of them are far better than today's "artists". Yet, despite the fact they've been on multiple legendary recordings, they've always shied away from real fame. This is a must see for music lovers of all genres, and it is an in depth look at what they have accomplished. I really loved the film, and I think it's an important film as it showcases really talented singers that deserve to be recognized. In terms of documentary filmmaking, this film manages to get into its subject very well and be very engaging. I wish however, they would have made the film much longer. I think that they managed to cover a lot of ground with what the filmmakers were able to get on film, but, backup singers are a topic that needs a much longer film in order to really make it something memorable. The film is a very well executed documentary, but it does have its flaws. The most important part of the film is exposing the talent that these singers have, and bringing to light their legacy in the genre. For that, 20 Feet From Stardom delivers, but there are things that could have been improved upon as well. Still for any music lover, this is a must watch, and it showcases the talents of these women perfectly. 20 Feet From Stardom is a very good picture that should have been great. The only problem here is that it's short, and therefore it does a bit to be desired.