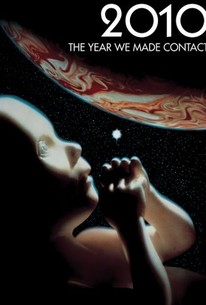 Critics Consensus: 2010 struggles to escape from the shadow of its monolithic predecessor, but offers brainy adventure in a more straightforward voyage through the cosmos.

Critics Consensus: 2010 struggles to escape from the shadow of its monolithic predecessor, but offers brainy adventure in a more straightforward voyage through the cosmos.

Critic Consensus: 2010 struggles to escape from the shadow of its monolithic predecessor, but offers brainy adventure in a more straightforward voyage through the cosmos.

In the long-awaited sequel to "2001: A Space Odyssey," Roy Scheider is sent back into space on a joint mission with the Soviets to try to find out what happened on the original mission. An attempt to answer the many questions left at the end of the first movie regarding the fate of one of the astronauts, the HAL 9000 computer and the spaceship Discovery on their journey to explore Jupiter.

Flash: There is intelligent life in outer space. More, anyway, than in this amiable footnote of a movie.

A hodge-podge of bits and pieces.

Hyams' sequel to Kubrick's big daddy of sci-fi movies may not have the novelty of 2001: A Space Odyssey, but it is still a better film than anyone could have dared to expect.

A lot of care has gone into it, but it has no satirical substructure to match that of the Kubrick film, and which was eventually responsible for that film's continuing popularity.

The build-up to this and the initial moments on board are racked with a tension that's superbly handled by Hyams. He maintains the forbidding atmosphere well and his skills as a cinematographer are evident.

Hyams' decision to separate his film from Kubrick`s one plays much more in favor of the very good feelings that the production leaves than it might seem at first glance. [Full Review in Spanish]

Hyams directed, produced, scripted, even supervised photography, but his dossier is not that of a masterbuilder. He's a sturdy craftsman who gets all the gears moving in tight rhythm. His film is impressive but not elating.

It has all the right plot elements, dramatic tension, and eye-popping special effects. The performances are uniformly good, the space-adventure scenes are excitingly handled, and the reappearance of HAL 9000 and Dullea is downright eerie.

It can't hope to compete with Kubrick, but if you can distance Peter Hyams's picture from its formidable forerunner, you'll find a thoughtful and sometimes unforgettable science-fiction fable.

A much slicker, studio-friendly job than the first one was, with its much more famous cast, and its easier aesthetic.

This is an interesting and entertaining sequel to 2001. It's nowhere near the masterpiece Kubrick made, but it is good in it's own right. Just didn't have the mystery and pure eeriness of 2001. Great cast, including a good performance by Helen Mirren.

A capable sequel to a bonafide classic. The cast is strong, the storyline is always interesting and arresting, and the mystery is still present. While it doesn't answer many questions that "2001" posed, it's still a visual delight and a fun journey back to what made "2001" so special. Keir Dullea gives a creepy performance as the main character from "2001" who is yanked back into the storyline masterfully.

You can't start a review of 2010 without referring to Kubrick's masterpiece 2001. What Kubrick created with that film was create an opera with the stars, polishing the story by Arthur Clarke and giving us a film that's a feast for the senses and in typically Kubrick fashion leaves us with more questions than answers when the closing credits roll. What 2010 does is try to explain what happened to Discovery in the nine years since HAL seemed to go mad and Dave Bowman disappeared. The world is on the brink of destruction between the United States and the Soviet Union (you have to remember this is 1984), but there is one moment of cooperation between the two countries when there is interest to investigate the monolith and the Discovery by the Soviets. The Soviets can get there faster, but the U.S. knows the systems better. The standard Rocky IV "us vs. them" mentality begins as the crew featuring Roy Scheider, John Lithgow, and Helen Mirren revive HAL and try to discover what happened near Jupiter nine years before. The first thing you need to do when watching this film is to distance yourself from Kubrick's vision in 2001. You will be disappointed and feel negative from the opening credits. Look at this film as a sequel to Clarke's story (which Clarke wrote, along with several sequels). The film explains things while leaving others still under a veil of mystery. I've always been an opponent to explaining every aspect of a film with its sequel, but with 2010 it seems less like a crutch than with other films that have done this (I'm looking at you Halloween II). 2010 is a solid sci-fi tale with some breathtaking effects (even though the dreaded black boxes appear in some shots). It's only crime is that it was a follow up to 2001 and, to be perfectly honest, there is no follow up to that film.