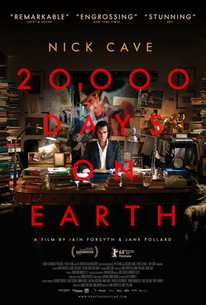 Critics Consensus: Revealing yet respectful, 20,000 Days on Earth is essential viewing for any Nick Cave fan.

Critics Consensus: Revealing yet respectful, 20,000 Days on Earth is essential viewing for any Nick Cave fan.

Critic Consensus: Revealing yet respectful, 20,000 Days on Earth is essential viewing for any Nick Cave fan.

Drama and reality combine in a fictitious 24 hours in the life of musician and international cultural icon, Nick Cave. With startlingly frank insights and an intimate portrayal of the artistic process, the film examines what makes us who we are, and celebrates the transformative power of the creative spirit. (c) Drafthouse

"Something happens onstage," Cave says, "where you forget who you are and become someone else." As much as any documentary can, 20,000 Days on Earth allows us to bear witness to what goes on in that process.

The title refers to the fact that the day chronicled is ostensibly Cave's 20,000th alive, though the movie is so slowly paced that 20,000 days seems more like the running time.

Near the end of the movie, Cave talks about living in the 'shimmering space' where imagination and reality intersect. He's talking about words and music, but he could be talking about 20,000 Days on Earth.

Forsyth and Pollard are visual artists-turned-filmmakers and their fine feel for the romantic possibilities of lighting and composition shape every frame. They're less sensitive to the line that separates drama from pretentiousness.

An intelligent and revealing look at one of rock's last true iconoclasts.

The performances and behind-the-scenes practices are rocking and revealing. Conversations are generous and surprising; Cave's monologuing inspiring, a celebration of a creativity and action.

20,000 Days on Earth is best in the moments where we see Cave interact with others.

We're carried through in impressionistic fashion, sound and vision beautifully in sync with stirring images of the Brighton landscape where Cave lives and gig footage that betters any recent concert movie.

The film ultimately uncannily honours the ethos of Cave the musician, as it in a sense - like him - enjoys mythologising storytelling and the creative process.

There's an ambition to Forsyth and Pollard's work that's hard to deny, as well as a refreshingly quixotic commitment to tweaking the generic conventions of the promotional piece they're making.

The structure of Cave's day feels contrived at times, and there are moments when his ramblings cross the line into self-indulgence, but for the most part this is an intimate, warm film that genuinely gets into the head and heart of a dark, brooding soul.

Audience Reviews for 20,000 Days on Earth

This funny, revealing and well-edited film is a must-see for fans of Nick Cave and also for those who would like to take an intimate look into an artist's creative process and motivation, even if the charm wears off fast and the doc is also stuffed with a tad too many concert scenes.

Nick Cave often produces music or books that end up being complete rubbish but you have to give him credit for trying and sometimes he succeeds in very interesting ways. Thankfully not a typical doc, this is a unique and fascinating look back at one man's life.

I know many people who never heard of Nick Cave... and it's amazing, but most of them are boring! I am glad that this British documentary co-written and directed by Iain Forsyth and Jane Pollard, with the help of Nick Cave himself, was on the opposite side of the scale! It was well edited, revealing, exciting, educational... it was to be expected that on its première in the World Cinema Documentary Competition at 2014 Sundance Film Festival won two Awards. Nick Cave is best known for his work as lead singer of the rock band Nick Cave and the Bad Seeds, a group known for its eclectic influences and musical styles since 1983. Cave's music is charged with emotional intensity, has wide variety of influences, and lyrics show obsessions with religion, death, love and violence. New Musical Express, in the early 2010s, called him "the grand lord of gothic lushness". This film depicts fictitious 24 hours in the life of this Australian musician, songwriter, author, screenwriter, composer and actor, prior and during the recording of his 2013 album Push the Sky Away. The first part was developing a story in very artistic , very smooth way, but the crescendo was obvious only when the music performed on concerts came on! Amazing transformation of a legendary musician. It can be a little bit too self-indulging at some stage, but Nick Cave deserves the right for it. Upon Cave's induction into the ARIA Hall of Fame, ARIA Awards committee chairman Ed St John said, "Nick Cave has enjoyed-and continues to enjoy-one of the most extraordinary careers in the annals of popular music. He is an Australian artist like Sidney Nolan is an Australian artist-beyond comparison, beyond genre, beyond dispute". I would love to recommend this to all of the Nick Cave fans, and those inspiring to become like him, especially interested in the creative process.