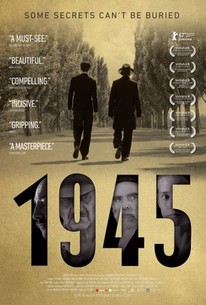 Critics Consensus: 1945 sifts through the aftermath of the Holocaust to offer a sober, well-crafted look at a variety of weighty themes.

Critics Consensus: 1945 sifts through the aftermath of the Holocaust to offer a sober, well-crafted look at a variety of weighty themes.

Critic Consensus: 1945 sifts through the aftermath of the Holocaust to offer a sober, well-crafted look at a variety of weighty themes.

On a sweltering August day in 1945, villagers prepare for the wedding of the town clerk's son. Meanwhile, two Orthodox Jews arrive at the village train station with mysterious boxes labeled "fragrances." The town clerk fears the men may be heirs of the village's deported Jews and expects them to demand their illegally acquired property back, originally lost during the second World War. Other villagers are afraid more survivors will come, posing a threat to the property and possessions they have claimed as their own.

Miklós B. Székely
as Suba Mihaly

Set in a specific time and place, 1945 also resonates as a story of people doing terrible things to other people in the name of opportunity and getting ahead. It hits home at a time when the idea of loving thy neighbor feels sadly passé.

A town wracked with guilt must come to terms with the horrors of its war atrocities in "1945," a somber drama set in the immediate aftermath of WWII.

This film adds to a growing list of Holocaust dramas and documentaries that move past the guilt of Nazi Germany to ponder the complicity of smaller communities in eastern Europe.

Features an intrusive sound design, including Tibor Szemzö's jarringly contemporary score and sound effects that include the ringing of a clock tower, buzzing flies, rumbling thunder and noisy birds...

Torok juggles plenty of characters and themes - guilt, greed, Russian meddling, the Holocaust, justice - but he always remains firmly in control of his story. Every frame is meticulously crafted.

This small film features a massive day of reckoning for everyone on screen, and is highly satisfying, sometimes darkly humorous, and wonderfully acted. You may have seen stories of betrayal like this before, but never told this way.

1945 is a brilliantly made film, and powerful, moving reminder of the evil that can take place under cover of wartime and the power of greed.

The darkness of wartime reaches not only into one day in August. In this muted but powerful film, Török is also commenting, obliquely but effectively, on the rise of far-right nationalism and anti-Semitism in present-day Hungary.

The film's straightforward but effective narrative holds few surprises while the talented cast strengthens the storytelling especially Péter Rudolf who makes a smooth transition from comedy to drama.

Marvellously directed and acted, 1945 shows how those who practice deception for their own ends are likely to pay the price and in ways they may not foresee.

Handsomely shot in black and white and just 91 minutes, Torok's picture does not linger long, yet it manages to say so much that matters.

There are no featured audience reviews yet. Click the link below to see what others say about 1945!