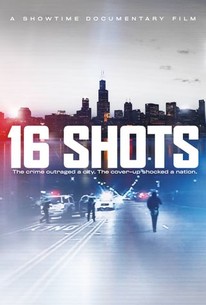 A documentary examining the 2014 shooting of 17-year-old Laquan McDonald by Chicago police officer Jason Van Dyke and thecover-upthat ensued. After the police initially declared the shooting as justified, journalists and activists fought for footage of the event tobe released, sending the Chicago Police Department and local Chicago government officials into upheaval as the community demanded justice

As Rowley's film reminds us, there was no huge public outcry in the immediate aftermath of Laquan's death, no major media surge to investigate the official police line.

Thoughtful yet stylish, 16 Shots maintains a firm grasp of these narratives while introducing a few more over the course of its runtime.

The movie offers many pungent details, including a telling one it holds until the last moment, and is structured for maximum drama.

This vital documentary recognizes that it's an issue that extends beyond the death of one teenager, but it never loses sight of that single life lost.

Voices are rarely raised in "16 Shots." But you can feel anger coursing through this film, and it says far more than loud words could.

There are no featured reviews for 16 Shots at this time.