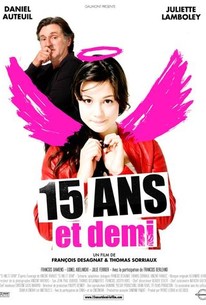 Recalling both Gerard Lauzier's Mon Père Ce Héros (1991) and Stan Dragoti's She's Out of Control (1989), this French-language comedy hones in on the adolescent complications that threaten to destroy a long-estranged dad's newfound relationship with his teen daughter. For years, scientist Philippe Le Tallec (Daniel Auteuil) has lived in the U.S., thousands of miles distant from his daughter Eglantine (Juliette Lamboley). In time, circumstances dictate that Philippe must return to the States to assume guardianship of Eglantine. He anticipates forging a deep and meaningful paternal-filial relationship with her, but fails to anticipate her many preoccupations, including wild partying, boys, and tightly-knit bonds with her girlfriends - preoccupations that threaten to drive a wedge in-between father and daughter. ~ Nathan Southern, Rovi

There are no critic reviews yet for 15 ans et demi (Daddy Cool). Keep checking Rotten Tomatoes for updates!

There are no featured audience reviews yet. Click the link below to see what others say about 15 ans et demi (Daddy Cool)!