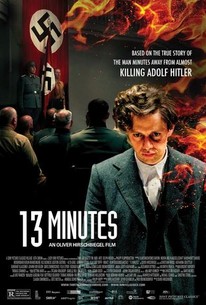 During Hitler's anniversary speech on November 8, 1939, a man is arrested on the Swiss border for possession of suspicious objects. Just minutes later, a bomb explodes in the Munich Bürgerbräukeller, immediately behind the Führer's lectern, killing eight people. The man is Georg Elser (Christian Friedel), a carpenter from Königsbronn in the Swabia region. When a map of the site of the assault and detonators are found on him, he is sent to the head of the Criminal Police in the Reichssicherheitshauptamt, Arthur Nebe (Burghart Klaussner) and the head of the Gestapo, Heinrich Müller (Johann von Bülow) to be questioned. From them, Elser learns that his attempt has failed--that the man he wanted to kill in order to stop the bloodshed of the World War that had just begun, has left the Bürgerbräukeller 13 MINUTES before the explosion. For days, Elser is interrogated by Nebe and Müller, for days, he holds out against their questions. Until he finally confesses and relates the story of his deed. Thus, Elser remembers how National Socialism slowly metastasized in his home village. How he attempted to oppose it, together with his best friend Josef Schurr (David Zimmerschied) and a few others. How he met Elsa (Katharina Schüttler), fell in love with her, but because of his plans had to turn away from her, his friends and his family. And how, finally, he acted: How he built the bomb, and installed it at the site in long nights of work.

Gerti Drassl
as Lore
View All

Watch Online: Pan’s Labyrinth, Clueless, Before Midnight, and More Certified Fresh Picks on Netflix and Amazon Prime
Despicable Me 3 Is Familiar But Satisfying

Although "13 Minutes" is a period piece, it addresses issues that continue to resonate in society.

[A] gripping, somber German-language drama based on actual events ...

Friedel conveys an awful lot simply with his eyes as Elser, projecting lusty soulfulness in happier times, sorrow over the Nazis' rise to power, and stunned disbelief at his plot's failure.

It puts one in the mind to make a meme: Hitler reacts to Oliver Hirschbiegel's prosaic flashback transitions.

Conspiracy theories surrounded the Elser plot for years, and his political motives have been debated; as scripted here, he acted alone and purely from moral conviction, which Friedel conveys in a passionate, charismatic performance.

"13 Minutes" is a superbly acted and strikingly evocative work, with careful attention to period detail and its many emotional beats.

Elser is an ocean lapping on to the beach. From above the sea is calm and serene, but underneath, the world swirls with chaos; Hirschbiegel's film replicates this to produce a fascinating, consuming drama.

The problem with Oliver Hirschbiegel's 13 Minutes is ultimately the weight of history... It hamstrings the drama.

When 13 Hours focuses on the assassination attempt and the interrogation, it is at it's best -- a bare-bones thriller that is interesting and engaging.

It is refreshing, heart breaking but, surprisingly, uplifting to know that individuals like Georg Elser existed and hopefully still exist.

There's something special about movies made of unknown stories based on the lives of people who have remained anonymous for decades. [Full Review in Spanish]

The kind of run-of-the-mill biopic that seems like a telefim, with a conventional script that lays every detail out in the open (in case you have any cognitive problem) and a series of irrelevant flashbacks that don't really help us understand the character as well as they should.