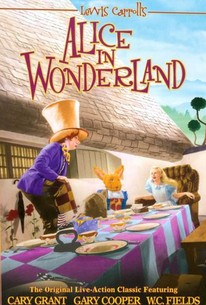 This star-laden version of Lewis Carroll's novel combines elements of both the title novel and Carroll's sequel, Through the Looking Glass. In England of the 19th century, young Alice finds that the mirror over the library fireplace opens into a strange world. She has odd adventures and changes size several times both before and after she follows a time-obsessed White Rabbit (Skeets Gallagher). Soaked after nearly drowning in a pool of tears, Alice is helped to dry off by a Dodo (Polly Moran), and encounters a caterpillar (Ned Sparks), whose mushroom also changes Alice's size. In a noisy home where the Cook (Lillian Harmer) and the Duchess (Alison Skipworth) are always fighting, Alice takes care of the Duchess' baby, but it turns into a pig and runs away. Asking directions of the Cheshire Cat (Richard Arlen) is no help, and a tea party with the Mad Hatter (Edward Everett Horton), the March Hare (Charlie Ruggles) and the Dormouse (Jackie Searl) is confusing and annoying.Alice meets the Queen of Hearts (May Robson), and encounters the Duchess again; while strolling with her, Alice meets the Gryphon (William Austin) and the Mock Turtle (Cary Grant). The twins Tweedledum (Jack Oakie) and Tweedledee (Roscoe Karns) recite a poem about a Walrus and a Carpenter (seen as an animated cartoon), but when they decide to go to battle, they're chased off by a crow. Humpty Dumpty (W.C. Fields) relates the poem "Jabberwocky" to Alice, then falls off a wall and breaks. The mournful White Knight (Gary Cooper), unable to put Humpty Dumpty together again, escorts Alice for a while, but she tumbles down a hill and finds she's become a queen. At a party in Alice's honor, the Red Queen (Edna Mae Oliver) becomes furious at Alice, who then wakes up to find herself in the library, with her kitten Dinah in her lap. ~ Bill Warren, Rovi

Billy Barty
as White Pawn and the Baby

Billy Bevan
as Two of Spades

Jack Duffy
as Leg of Mutton

Alec B. Francis
as King of Hearts

Edna May Oliver
as Red Queen

May Robson
as Queen of Hearts

Ford Sterling
as The White King

Colin Kenny
as The Clock

Charles McNaughton
as Five of Spades

Patsy O'Byrne
as The Aunt

Will Stanton
as Seven of Spades

News & Interviews for Alice in Wonderland

RT on DVD & Blu-ray: Alice in Wonderland and Never Let Me Go

View All Alice in Wonderland News

Critic Reviews for Alice in Wonderland

There's a ragtag feel to this Alice in Wonderland, which works in keeping with the absurdity of the situations but fails in making the material stick.

Lewis Carroll's ingenious fantasy faithfully screened. A film for all ages and both sexes.

It was hoped that the picture would have a large appeal for children, but the consensus of opinion seems to have been that even the Little Ones had rather see Jean Harlow any day, or else stay home in the nursery and play Tick-Tack-Toe.

What the curio lacks is the spirit of the classic novel.

With apologies to Tim Burton, the version of Alice in Wonderland that I most treasure is Norman McLeod's 1933 film for Paramount.

An eerie collection of irritating, semi-paralyzed caricatures screaming at you for 77 minutes.

You might not peg Norman Z. McLeod as a comic absurdist but the former animator dives into the witty nonsense of Carroll's world with the same rapid-paced, straight-faced energy as his two Marx Bros. comedies...

Audience Reviews for Alice in Wonderland

Impressive costumes, especially for the time period but it's a shame it isn't in color. Only a few of the star studded cast is recognizable under their elaborate costumes.