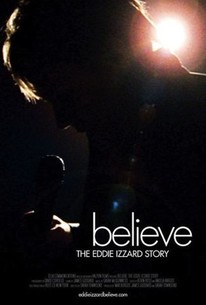 This documentary chronicles the career of the massively popular British funnyman Eddie Izzard on his journey from humble standup comic to internationally recognized actor and comedian. With rare footage from his early performances, including the infamous "Wolves" sketch, the film follows him backstage during the most trying moments of his comeback tour, and delves into the personal struggle for inspiration and success that predicated his return to the spotlight.

Several things might strike you as odd about Believe: The Eddie Izzard Story, a documentary about the cross-dressing British comedian.

Sarah Townsend's Believe: The Eddie Izzard Story illuminates the life and career of the protean, gender-bending comedian-actor through an astonishing collection of footage.

The compelling documentary Believe condenses the comedian's fascinating life into 105 minutes of interviews, archive material and -- most importantly to understanding any performer -- several decades of performance footage.

Not quite as involving as I had hoped, it still gives some insight into one of the funniest people alive today. Any new Eddie is good Eddie, even in documentary form.

Interesting documentary about the life of Eddie Izzard, flawed only by focusing largely on the his "struggling artist" early years, then breezing fairly quickly through his more successful years (and his film and tv work gets little more than a footnote). Those unfamiliar with his stand-up won't be terribly interested or impressed, but long-time Eddie fans like me will no doubt be intrigued. Some of the most interesting material is watching him workshop new material in small venues in preparation for his "Sexie" tour.