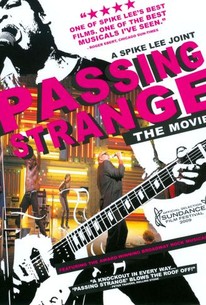 Critics Consensus: Spike Lee's document of the Tony Award-winning musical Passing Strange is every bit as compelling onscreen as it was on stage.

Critics Consensus: Spike Lee's document of the Tony Award-winning musical Passing Strange is every bit as compelling onscreen as it was on stage.

Critic Consensus: Spike Lee's document of the Tony Award-winning musical Passing Strange is every bit as compelling onscreen as it was on stage.

In this astounding and explosive documentary, Spike Lee captures the eponymous Broadway musical show written by singer/songwriter Stew. The resulting work unites revelatory theater with superb filmmaking, raising the whole to a dizzyingly plateau of emotional engagement. The story (developed at the Sundance Theatre Lab) concerns the uneasy relationship of a young black man (called simply Youth in the show's credits) with his life. Raised somewhere south of Interstate 10 in Los Angeles, our hero, a would-be songwriter, stews in a sea of conflicted cultural signals. He chafes under his mother's fixation on family ties and church and her bourgeois aspirations. So he sets out on his own-like pioneers Josephine Baker and James Baldwin-to Europe, seeking something "real." Picaresque misadventures with sex, drugs, politics, and art await Youth in far-out Amsterdam and hypermilitant Berlin. His eyes are opened ever wider, even revealing what he left behind. An absolutely superb cast, ably supported by sparing (but pitch-perfect) costumes, design, and stagecraft, bring to life the emotionally charged story with its astounding original music, narrated and overseen by Stew himself. Lee's multicamera coverage of the event (including backstage scenes) involves the audience in not only the text but the electricity of the ensemble's onstage adventure. It's a tour-de-force of creative collaboration and inspiration.

Rebecca Jones
as Sherry
View All

Lee doesn't reinvent the wheel when it comes to filming live theater, but he moves the camera artfully and edits with an energy that matches the music. And he makes good use of close-ups, capturing the sweaty faces of a troupe of remarkable performers.

You'll probably have to resist the urge to stand up and cheer with the onscreen audience during the emotional curtain call.

Spike Lee's Passing Strange: The Movie is basically canned musical theater, but this is one Tony-winning Broadway show that's well worth preserving and seeing.

The invigorating result, zestily edited by Lee's own inside iron man, Barry Brown, is in every way a knockout.

I can't single out a performance. This is a superb ensemble, conveying that joy actors feel when hey know they're good in good material.

It's a joyous production; the music is alive and dynamic, the skits are clever and funny and self-effacing and the show crackles with energy...

Interesting that one of the best movies of the year is a filming of a play. That's a sad commentary on Hollywood but sufficient reason to see this uplifting and very witty movie.

Although more of a stage play than a film this performance has great acting and great music combined with a heart felt message.

A rousing, emotional roller coaster that's a must see not just for fans of rock musicals but those with an eye (and an ear) for something unusual - compellingly so.

If you passed up the opportunity to catch this Tony-award winning rock musical during its Broadway run, don't make the same mistake with Spike Lee's vibrant film adaptation.

In 1976, a young man(Daniel Breaker) is sleeping in on a Sunday morning in South Central Los Angeles. His mother(Eisa Davis) has other plans for him including church to which she drags him. While there, he has a religious experience but not the one she was hoping for. The message is musical, as the young man falls under the spell of Mr. Franklin(Colman Domingo), the son of the pastor. That leads to him being in a punk rock band with Sherry(Rebecca Naomi Jones) and Terry(Chad Goodridge). This is a film of the last performance of the musical "Passing Strange" at the Belasco Theatre on July 20, 2008. As such, one could argue its cinematic merits and its Broadway origins and cliches.(So many poseurs, so little time.) But what is undeniable is how entertaining the movie is, mixing genres and types of music freely. What resonated with me the most is something the narrator(Stew, who also wrote the book and co-wrote the music) said while speaking from either a podium(read into whatever symbolism you like) or sitting at a desk in that we make the biggest decisions of our life while we are teenagers, which could involve college, work or to leave home for the first time. Like the young man in the play, I thought it an easy decision but only deceptively so since I had no idea of what kind of person I would turn out to be.

Flashy filmed performance of a Broadway stage play. Set in the late 1970s, a young black musician rebels against his church-going, middle-class, South Central roots by traveling the world in an effort to experience something "real" in life. Los Angeles performance artist Stew narrates what is essentially a concert trip through a dizzying number of musical styles that touch upon gospel, punk, blues, jazz, and rock. The ubiquitous score is excellent, but it's surrounded by an incredibly stagy artifice with a noticeable lack of sets, that feels overly avant-garde. We're constantly reminded that this is a filmed play. Even the acting is affected and unnatural. The passion felt by those who were in attendance in that theater is not the same emotion felt as a viewer watching it on a screen. Brilliantly catchy songs include: "Love Like That", "Amsterdam" and "We Just Had Sex".

Now this was most excellent. Very entertaining musical with great performances and interesting format. Stew is highly entertaining, and Spike Lee does a great job of capturing the live performance vibe with a good blend of camera angles and shots.

Your enjoyment of this film will probably be in some sort of equal proportion to your enjoyment of the show (if you saw it). What is great about Spike Lee's document of a performance of this not-like-anything-else musical is his remarkable eye for where you should be looking, and as he cuts from vantage point to vantage point he is unerring in focusing the work; if the close-ups sometimes rob the larger picture of its glory, they also have the benefit of making the non-linear more explicable... My appreciation of the piece remains a little distanced, but the parts that I love I out and out love. And there were more of those than I remembered, that's for sure.