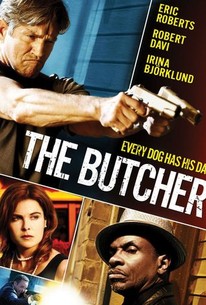 A mob enforcer is set up to take the fall for a multi-million dollar heist involving a rival gang boss. Merle (Eric Roberts) is a gambler stuck on a twenty-year losing streak, but his luck is about to change. Surviving a trap that was intended to kill him, Merle makes away with a beautiful woman and a piece of the take. Most men in that position would have been content to simply walk away with their lives, but Merle has been loyal for twenty years. Realizing he's been betrayed, something inside snaps. They used to call him "The Butcher" as a joke, but the laughter turns to screams when Merle returns to deliver the ultimate punchline.

Critic Reviews for The Butcher

There are no critic reviews yet for The Butcher. Keep checking Rotten Tomatoes for updates!

Audience Reviews for The Butcher