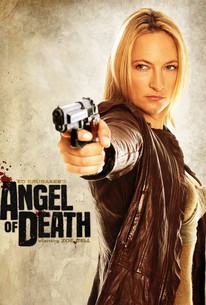 Renowned comic-book auteur Ed Brubaker, writer of The Death of Captain America, spins a pulpy yarn custom-made for death-defying star Zoe Bell (Death Proof). In this pinnacle of the grindhouse renaissance, Bell stars as Eve, a ruthless assassin who, in the midst of a hit, gets stabbed in the head before accidentally killing a young girl. She survives the ordeal only to be plagued by visions of her past victims. Now with a conscience and unable to work, Eve realizes she must track down her former bosses before some unspeakably sinister hitman inevitably comes to erase her existence. Lucy Lawless and Doug Jones co-star in this sexy and stylish thriller.

Bell's charm and finesse with a right hook help elevate Angel of Death from being a mundane straight-to-DVD offering.

...a surprisingly cinematic actioner that ultimately feels like a low-budget cousin to 2005's Sin City.

Hmmm... I was surprised by the level of enjoyment I got out of this action packed, noir-y, comic bookesque, but did have some definent problems with it as well. Perhaps most importantly, and something I was never really able to get past. There were some terrible casting decisions here. Many of the actors just arent capable of really pulling off the roles they were given. Jake Abel is my main target for that complaint, but there were a few others as well. Also this movie feels like it really wants to be 2-4 already existing movies all at the same time. That's fine, just don't be surprised when you're movie doesn't have as much of a shelf life as the movies your emulating. All that aside I did find myself enjoying this movie anyways. It does have great production values, is fast paced and with non stop action. Also short and sweet so doesn't overstay it's welcome. A good decision as my complaints with this film are pretty serious. If it dragged on for 2 hours my rating would be lower, but for what it is I would say its still above average, despite it's flaws. Worth a watch for sure for action fans.

Hooray for Zoe Bell! And Ed Brubaker! Let's hope their next collaboration isn't quite so familiar as this one is.

Eve (Zoe Bell) has made a life for herself as a tough-as-nails assassin. Whenever there's a complicated hit that needs to go down, Eve is the woman the top guys call. Unfortunately, her latest assignment took a nasty turn. In the middle of taking out a posse of tough guys, Eve is stabbed in the head. Yes, you heard that correctly, stabbed in the head. She stumbles out of the building with a massive knife lodged firmly in her brain. An associate takes Eve to see a heroin-addicted mob doctor (Doug Jones) whose idea of brain surgery is simply pulling the knife out and putting a bandage out the wound. Somehow, Eve survives the procedure. Initially she seems to be okay, but on her next assignment she is startled to discover that she can't pull the trigger on a target. Eve furiously returns to the doctor, demanding to know what he's done to her that is making her feel bad about what she's done. The doctor insists that he hasn't done anything. For some reason, Eve simply can't kill the people she's supposed to and has a sudden urge to take down some very dangerous people. In no time at all, Eve finds herself on the run. Can she survive the legions of thugs now on her tail? Even if she does, it doesn't look like there's much hope for a happy ending. This is a movie that was originally a series of web episodes that were put together as a movie.. Its pretty seamless and you will not notice this when your viewing the film. The story was written by comic book writer Ed Brubaker. He has done great work in such titles as Daredevil and Captain America. Here he does a solid job with this story of a female assassin in the vein of La Femme Nikita. Zoe Bell is great here not only does she pull this job off as a actress, her stunt and fighting skills are amazing. I hope she appears in more roles like this in the future. To sum up this film is rough around the edges due to its low budget but its a solid action film to check out if your in the mood for one