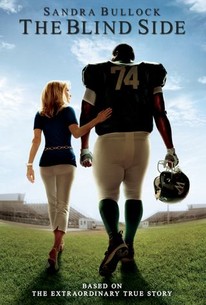 Critics Consensus: It might strike some viewers as a little too pat, but The Blind Side has the benefit of strong source material and a strong performance from Sandra Bullock.

Critics Consensus: It might strike some viewers as a little too pat, but The Blind Side has the benefit of strong source material and a strong performance from Sandra Bullock.

Critic Consensus: It might strike some viewers as a little too pat, but The Blind Side has the benefit of strong source material and a strong performance from Sandra Bullock.

The Blind Side Photos

Taken in by a well-to-do family and offered a second chance at life, a homeless teen grows to become the star athlete projected to be the first pick at the NFL draft in this sports-themed comedy drama inspired by author Michael Lewis' best-seller The Blind Side: Evolution of a Game. Michael Oher was living on the streets when he was welcomed into the home of a conservative suburban family, but over time he matured into a talented athlete. As the NFL draft approaches, fans and sports radio personalities alike speculate that Oher will be the hottest pick of the year. Sandra Bullock stars in a film written and directed by John Lee Hancock (The Rookie, The Alamo). ~ Jason Buchanan, Rovi

April Rich
as Teacher in Lounge

Phil Fulmer
as Himself

Phillip Fulmer
as Himself

Lou Holtz
as Himself

Tom Lemming
as Himself

Houston Nutt
as Himself

Ed Orgeron
as Himself

Franklin "Pepper" Rodgers
as Himself

Nick Saban
as Himself

Tommy Tuberville
as Himself
View All

News & Interviews for The Blind Side

View All The Blind Side News

Critic Reviews for The Blind Side

The movie is done with crispness, vigor, down-home humor, and an over-all tang of good feeling, but the pushing of buttons is the work of extraordinary calculation.

As a fable about the power of giving, it hits pretty hard.

A Photoshopped image of reality that is bland, parochial, and stereotypically acted by a cast who have nothing like the subtlety and range of Trey Parker's puppets from Team America: World Police.

Bullock turns in a terrific, ball-breaking performance. Unfortunately, the rest of the film is painfully patronising.

Shows that America, for all its loudhailed Christianity, doesn't really need God at all. It just needs Sandra Bullock and her like.

A few momentary hiccups aside, the film plays out in sickly-sweet fashion, relentlessly shoving the Touhy's self-righteous values down the audiences' throat and never bothering to consider the wider social ramifications...

It felt tired and clichéd and the frequent and obvious emotional button-pushing failed to ignite any real response from me.

This is a horrid film, and I hated it, and while, I suppose, you can't argue with a true story, you can always argue with the way it is told.

... I must say that I doubt I'd like the film as much had it not been Christmas and just a plain ole good family flick to see with my mom.

[It] is all about the family's altruism and turns a blind eye to silent Michael, with father Sean offering up the excuse: "Michael's gift is his ability to forget." I'm not convinced but that didn't stop me from enjoying the film and admiring Bullock.

The movie is very familiar -- you've seen it all before -- but it succeeds at achieving its modest goals.

It's certainly a heartwarming tale and Bullock delivers a big, ballsy performance as the indomitable Tuohy - but Oscar-worthy? What were they thinking?

Audience Reviews for The Blind Side

While the politics of this are extensively offensive it's packaged as innocent entertainment, hiding its "some of my best friends are black" subtext in plain view. As bad as Reefer Madness was about marijuana, and a career low for Bullock.

A patronizing drama that uses a manipulative narrative structure to make you buy its disgusting message that for a black young kid such as Big Mike to succeed in life, he should follow closely what he is told by his "white Republican saviors," for only they know what is best.

although this film has its cliche moments, it is far better than the normal run of the mill feel good sports movie. bullock and bates were both very good, and michael oher's story is a special one. the film was filmed especially well and most of the dialogue was compelling. a rare film among recent sports films in that i strongly recomend it.

Sandra Bullock is rapid and compelling in this true story of tragedy-turned-triumph. The Blind Side is an enjoyable that some may consider a bit too soft or safe. Though it won't completely win moviegoers over, they'll still be in awe of the bold lead actress. 4/5

The Blind Side Quotes