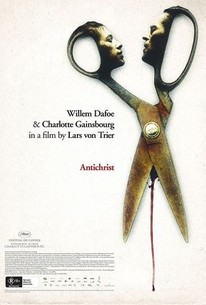 A grieving couple retreat to 'Eden', their isolated cabin in the woods, where they hope to repair their broken hearts and troubled marriage. But nature takes its course and things go from bad to worse.

Charlotte Gainsbourg
as She

Willem Dafoe
as He

Of course, von Trier wants us to react, to be repulsed, shocked, offended. Mission accomplished.

Von Trier, never exactly an optimist, has never been this gloomy and pessimistic. Antichrist is the feel-bad movie of the year.

Yes, Antichrist is harrowing and often shrill, but the horrors all serve the underlying theme that, try as they might, men can never fully understand the inconsolable grief women endure when they lose a child.

Antichrist is a boldly personal film, tossing all von Trier's ideas about faith, fear, and human nature into an unfettered phantasmagoria, full of repulsive visions and fierce scorn.

Self-loathing, mean, ugly and perfectly made, Antichrist is probably the best film ever that you'd recommend to absolutely no one.

[Lars] von Trier has made an exquisite, haunting reverie whose beauty only intensifies its foreboding qualities.

Charlotte truly excelled by bringing her usual brand of depressive confusion as a grieving mother in a state of constant anxiety and guilt. She epitomizes the shy "it girl" gone dark. In a way, she became Tiers muse...

It is frightening because it takes an unflinching look at the power and complexity of our emotional lives, a power so great that it might in fact destroy us.

Cinema in the purest sense, a kind of dark, sadomasochistic poetry that transcends words and easy descriptions. It may revel in its own chaos, but chaos has never been so profound.

The Danish madman dives deep and horrifically into the territory of theology, aiming his criticisms at the misogyny of religion and, in turn, society.

The film is for the most part a wry treatise on how a grieving couple strip away the ego and the rational for an increasingly fraught trip into confronting their primal fears.

A far warning to those who can't deal with anything shocking, horrific, gross, or evil: this is not the film for you. Walk away, tuck yourself in, and go to sleep. This film is a descent into the hellish wasteland that is our inner selves. Lars von Trier creates films with characters that have motivations that are unlike the average human being. Charlotte Gainsbourgh appears in this, her first of three von Trier collaborations, as a grieving mother, who has just lost her infant son. Willem Dafoe is her analyst husband, who tries to comfort his wife by becoming her therapist, and they embark into the woods to work within the sphere of their grief. Von Trier creates stunning imagery, dreamlike logic, and nightmarish action between his two leads, who take up the entire film. I enjoyed the turmoil between this modern day Adam and Eve, as they grieved for their son, but it seemed impossible for them to move on. Dafoe's character (named simply He) tries to make everything right again, but his instincts ring hollow to his wife, who doesn't trust, nor does she believe, in his sage words. The motivation for the last third of the film doesn't meld with the rest of the narrative, except when it comes to She's self-mutilation and punishment. Sex as pleasure versus procreation is also a heavy theme thread throughout, feeding the grief that swells within She. It's a film full of big ideas and big emotions, and while I will never watch this again, thanks to my gag reflex, I thought it said some immensely prophetic things about the human race, and where we have been and where we are going.

Lars Von Trier is a unique filmmaker that has a style that I would describe as eccentric, haunting, yet somewhat beautiful. With Antichrist he crafts a film that is horrifying and unforgettable. The cast here is impeccable and Trier's choices are terrific. Willem Dafoe and actress Charlotte Gainsberg deliver great performances here, and the story itself takes its time to unfold, with steady pacing, which is key in telling an effective story. Antichrist may not be a film for everyone, but those who enjoy Art films; well this is a film worth seeing. Antichrist is a tense, horror film with the art house flair, and Lars Von Trier delivers an unflinching. Raw in your face picture that has a powerful sense of visuals. Trier always seems to go for an unsettling way in telling a story, and he more than accomplishes that with this horror drama. Considering that Antichrist comprises of such a minimal cast of actors, I founds the film to be accomplished piece of cinema. If you have varied taste in cinema, then Antichrist might suit your palette. The content expressed on film is disturbing, and unforgettable, but that's what makes it resonate with the viewer. Antichrist seeks to disturb and succeeds in doing so. The film has its flaws, but as a piece of horror filmmaking it does succeed at capturing genre elements through Trier's camera lens. Overall this is a film that will appeal to genre fans, and it is well executed and quite tense throughout and like I've said before, due to its horrifying visuals, Antichrist is a film that you won't forget.

A valiant, unsurprisingly ballsy and undeniably beautiful attempt by von Trier at creating a horror movie that goes deep into primal human fears than the popular 'jump scare' genre, but he eventually tries to tackle far too much, including religion and gender issues. As a result, the ending of the film is not just disturbing (as it meant to be), but either confused or simply confusing (whether the fault of the filmmaker or the viewer, a film that loses the audience while trying to shock them can't be seen as a complete success).

In presenting such a radical and polarizing title, Lars Von Triers asks the central questions: Where does evil come from, and is man an inherently evil species. Antichrist does not mean the "opposite" of Christ (defined as grace or goodness in this context), but opposed to. Of course it's a fine line, and "opposed" can have several interpretations, just as this film, a two person play of sorts, can leave you arguing about not only who is "good" and who "opposes good", but the aforementioned central question. As I mentioned, this is a two person drama (with the exception of animals - one who speaks two prophetic words; and an infant who only appears in the film's prologue). Interestingly, the two characters don't use each other's name during the film (perhaps showing a lack of intimacy in spite of all their on screen lovemaking), so Willem Dafoe and Charlotte Gainsbourg are simply "he and she". Von Triers begins the film with a lovely black and white passage, shot in slow motion, of the pair making love, oblivious to their surroundings and unaware that their toddler is able to maneuver his way past the infant gate and is... well let's just say he's a bit curious about the snow outside their loft apartment. This is all beautifully filmed and could stand alone as a short subject. Unfortunately this sequence is only the setup for the film, which is presented in three acts, and in spite of some wondrous and inventive shots, suffers from some truly atrocious editing in its storytelling. Essentially we're dealing with emotional trauma here, and the stages of getting through said trauma - grief, pain and despair, each given a "chapter" in the film. For its first half, the film manages to keep you involved and wondering where this is headed. There's an overtone of "evil" with a capital E, that may represent Satan or not (as one scene clearly indicates, when He (a psychiatrist) tries to break She from her "abnormal anxiety" by making a pyramid list of her fears - at one point he puts Satan at the top, but then scratches that out). What begins as a possible treatise on trauma and grief (which would have been a fine film, as it presents how differently two people can deal with the same tragedy), the film makes a sudden turn, if not into the supernatural, then into the psychotic natural and the surreal - which, at least for a time also works, until the surreal clashes heads with the all too real, leaving the film obvious and far removed from better possibilities. There was so much potential here, but sadly the motivations became trite and oversimplified, as if Von Triers was afraid to leave anything ambiguous, such as She's investigation into Genocide (i.e. the killing of witches), which leads her (and supposedly the viewer) to ponder upon the supposition that women are inherently evil (the spawn of Satan and all that). She is a representation of all womankind - a portrayal of the emotional part of humanity, where logic cannot find a foothold. It is said in the film that nature is the culprit (and nature being the Devil's playground), and that due to nature, women are not in control of their bodies (I suppose meaning the monthly thing). He is portrayed as logic; cold and distant, seeking finite answers to the infinite questions. Again, this is interesting, and perhaps in better hands could have been profound; but here, sadly, we end up with a brutal sadistic bit of film pretending to be "horror". My final score is in the middle, due to the wonderful opening sequence, some imaginative imagery, an interesting concept and some powerful, raw acting - as opposed to the last half, with some serious wrong choices, and jarring editing. Woulda, coulda, shoulda.