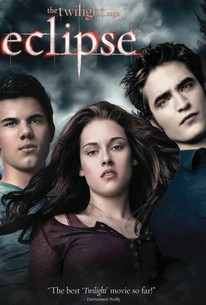 Critics Consensus: Stuffed with characters and overly reliant on uninspired dialogue, Eclipse won't win The Twilight Saga many new converts, despite an improved blend of romance and action fantasy.

Critics Consensus: Stuffed with characters and overly reliant on uninspired dialogue, Eclipse won't win The Twilight Saga many new converts, despite an improved blend of romance and action fantasy.

Critic Consensus: Stuffed with characters and overly reliant on uninspired dialogue, Eclipse won't win The Twilight Saga many new converts, despite an improved blend of romance and action fantasy.

The third film in the Twilight series explores a love triangle between Bella (Kristen Stewart), Edward (Robert Pattinson), and Jacob (Taylor Lautner) as the werewolf pack and the Cullen clan join together to fight a new breed of vampires. Melissa Rosenberg provides the screenplay for the Summit Entertainment adaptation of Stephenie Meyer's best-selling novel, with director David Slade calling the shots behind the camera. Bryce Dallas Howard joins the cast as Victoria, the role originally played by Rachelle Lefevre in the first film. ~ Jeremy Wheeler, Rovi

Peter Murphy
as The Cold One

What began as an enjoyably perverse fable of teen romance and chastity has dwindled, by this third instalment, into a sorry, soppy saga.

All three actors are comfortable with their characters, and Slade finds the right balance of action and romance; the story feels organic. Some of the dialogue is earnest and silly, but the core strength of the Stephenie Meyer novels is here: the battle be

"All I want is your protection," he says to Bella, firmly removing her hand from inside his shirt. "I'll protect you no matter what." Edward Cullen: the human condom.

The biggest problem remains the characters: neither Slade nor Stewart are capable of turning manipulative whinger Bella into anything more than a joyless black hole sucking the life from every scene.

When it comes to the things this brand is famous for -- angsty canoodling, ethereal rocking out, truckloads of male beauty, Duran Duran-style make-up and culturally savvy jokes -- Eclipse actually goes one better than the last offering.

It's easy to knock the Twilightfilms, with their taste for cheesy special effects and teenage hyper-ventilation, but the feelings that course through them are honest enough -- just your average old-fashioned romantic-masochistic teen-dream rapture.

Eclipse is a film for a target audience and this one hits the bullseye.

Director David Slade does his best, but the material follows such a rigid and generic formula that there is no room for him to bring any kind of personality to it.

Eclipse is a movie about rejecting adulthood, not just as a person but also as a culture. It's about never crossing boundaries, never leaving home.

... Eclipse seems to move along in a lethargy of vampire coldness and adolescent superficiality. [Full review in Spanish]

With awful dialogue, ridiculous plot contrivances and painful acting by everyone, this movie could be easily subtracted from the series without any loss - and it is actually a mystery how a poor narrative like this can be called a "saga" when nothing ever really happens.

More teenage angst and more brooding close ups galore. This franchise has a good story to be fair, after reading up on the whole thing its actually pretty neat and better than Harry Potters ever confusing character mad adventures. I realise this is probably based more towards teenage girls but one problem with this film series is the frustrating teen hormones and flirting *yawn* it really does get fudging annoying and wrecks a good supernatural idea, and yes I know that's the whole idea of the premise but its still damn annoying. Bella continuously goes around pissing off both male leads because she can't choose *groan* so she continuously flirts between the two. What's so daft about the whole thing is how all the vampires in one coven, and all the shape shifters in one pack go out of their way to protect and shelter Bella despite putting themselves in mortal danger all the time!! I wouldn't. In spite of many silly/annoying little factors this third film isn't actually too bad, the first was OK, the second was a little worse but this is better as we are in the thick of the plot now things are more interesting, we still gotta sit through allot of boring talk and teen love spewing but we do see some origin flashbacks for vamps and wolves plus a pretty good fight sequence at the end which makes up for allot of crapola. The CGI is still a touch dodgy with the wolves and generally nothing special but its just acceptable. Acting is more Aussie soap opera at best but again just acceptable. At the end I did find myself wanting to see the forth and final chapter so job done for the director. This is probably the first 'soap opera' flick franchise I've come across and I'm actually liking it so far!! more 'Buffy' meets 'Beverly Hills 90210' but some how it does appeal to me, probably the vampire fanboy inside. Its slowly getting good after a sluggish start so don't write it off too quickly.

Eclipse is uninspiring and yet more action-based than its previous two installments. Though the action brings it up a step, the rest of its direction brings down further to the trenches. 2.5/5