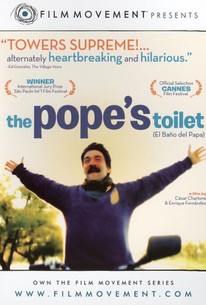 Critics Consensus: An offbeat charmer, The Pope's Toilet is a humorous, well-crafted tale with plenty of heart and a poignant social message.

Critics Consensus: An offbeat charmer, The Pope's Toilet is a humorous, well-crafted tale with plenty of heart and a poignant social message.

Critic Consensus: An offbeat charmer, The Pope's Toilet is a humorous, well-crafted tale with plenty of heart and a poignant social message.

Uruguayan directors César Chalone and Enrique Fernández co-helm the nutty Spanish-language farce El Baño del Papa (The Pope's Toilet). The film unfolds in 1988, during Pope John Paul II's visit to Uruguay. While dozens of economically struggling locals devise plans to turn a buck from the arrival of the papal father -- such as baking cakes and wrapping chorizo sausages -- only one concocts a scheme to earn a fortune from defecation. Beto, a nickel-and-dime smuggler, reasons that all of those cakes and sausages will be digested rather quickly and that over 50,000 locals will soon be clamoring to use the porcelain bowl. Of course, toilets abound in South America, but Beto sets his public toilet apart by crowning it with an aura of prestige -- his will be the only Pope's Toilet in all of Uruguay, and residents, he is certain, will soon be clamoring to use it. Unfortunately, before he can set his scheme in motion, Beto must first locate the most appropriate toilet and make several risky trips across the Brazilian border and back to that end. Then, just as Beto is within arm's reach of success, someone thoughtlessly steals his beloved bicycle -- further hampering his mission. Regardless of the complications at hand, however, Beto's determination persists.

Paula Larruina
as Child In Shop

Carlos Lissardy
as Ches The Madman

Brandon Antuña
as Boy With Stone

Jessica Tiscornia
as Mother With Baby

Mirta Machado
as student
View All

The cast of pros and amateurs provides realistic performances, and co-director Charlone's lensing makes beautiful use of the rough landscape in a movie even the pope would enjoy.

Watch it now, and you'll be surprised how such a little movie can cut so deeply to the bone.

The Pope's Toilet entertains, even while it illustrates how the impoverished can adjust their religious ideals out of desperation.

The Pope's Toilet cloaks religious critique in the scrappy tempo of irremediable poverty and irrepressible enterprise.

The movie isn't as bad as I feared, but I can't give it much of an endorsement, either.

The Pope's Toilet excels most in its expression of a particular time and place, which Charlone films with the kind of physical intensity and realism associated with recent Argentine cinema.

Despite the sensationalism of Holy Father's arrival, the subtext here is that there's a speck on the map whose poor are treated as well as a backed-up john.

A celebration of hope, humor and resilience among the humble and only secondarily a dig at media distortion and the disconnect between the Church and the poor.

Although not the best imaginative movie title ever to grace a matinee sign, The Pope's Toilet resonates with a distinctive warmth and sense of reality and purpose.

Not as funny as the title would suggest.

This bittersweet parable has loads of charm but several graver issues are also raised.

Rich Cline
Shadows on the Wall
View All Critic Reviews (26)

In "The Pope's Toilet," to make ends meet, Beto(Cesar Troncoso) smuggles goods across the Brazilian border by bicycle where on one trip his pal and fellow smuggler Valvulina(Mario Silva) is unlucky to have his goods confiscated by their nemesis, Meleyo(Nelson Lence). Anyway, Beto is not getting any younger and would like his teenaged daughter Silvia(Virginia Ruiz), a wannabe journalism student, to join in the family business but his wife Carmen(Virginia Mendez) violently disagrees. This is all towards buying a motorbike which would make his job that much easier, especially with his knee acting up. His bad knee also forces him to take the low road on a run which leads to an unfortunate run-in with customs. But the Pope is coming to visit and Beto has a plan... Inspired by a real story, "The Pope's Toilet" is a heartfelt movie about a poor community that is hampered by the arbitrary nature of borders and authority that preys on the weak. So, you can understand that they see a huge opportunity when the Pope comes to visit. For the faithful, this means spiritual but most see it as a chance to make money to at least temporarily lift them out of poverty. And some wonder if it is right to make money off the Pope's visit. But, then, they do not have any choice, do they? And what's more important, anyway?

This movie is a GEM! The story is filmed based on a true event that happened in 1988 when the Pope visited Melo, Uruguay. It's beautiful, sad, inspiring, truthful, funny and angry. Superb music! EXCELLENT acting! A must watch!