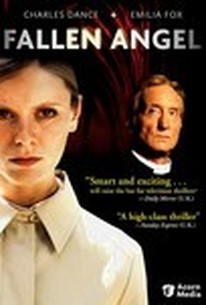 Charles Dance and Emilia Fox headline this made-for-television crime drama concerning an ethereal beauty whose attractive visage masks a malevolent motivation. Angel Wharton (Fox) is a true monster; a woman who abducts children and offers them up as prey for a pedophile. But how could such an outwardly normal woman be capable of such reprehensible crimes? Could her distant father - an ambitious vicar - be to blame, or perhaps it was the family friend who betrayed her at a young age? Then again, maybe it was her weak-willed mother. A noted departure from the typical police procedural, Fallen Angel takes viewers on a trip back in time to examine the chilling circumstances that created a serial killer. ~ Jason Buchanan, Rovi

There are no critic reviews yet for Fallen Angel. Keep checking Rotten Tomatoes for updates!

There are no featured reviews for Fallen Angel at this time.