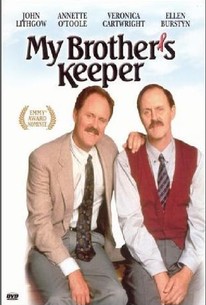 A man facing AIDS has to deal with the personal and social ramifications of the disease in this made-for-television movie. John Lithgow was nominated for an Emmy for his portrayal of twin brothers, one of whom is a teacher diagnosed with AIDS. The film shows how his small town rallies to support him after one courageous woman speaks out and refuses to ostracize him.

Critic Reviews for My Brother's Keeper

There are no critic reviews yet for My Brother's Keeper. Keep checking Rotten Tomatoes for updates!

There are no featured reviews for My Brother's Keeper at this time.