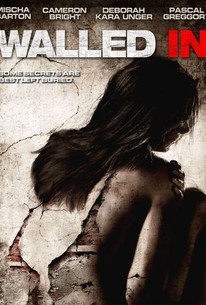 An engineering graduate supervising the demolition of a mysterious building unearths some unsettling secrets about the pristine building and its previous inhabitants in this dark psychological thriller starring Mischa Barton. Adapted from Serge Brussolo's graphic novel of the same name, Walled In follows fledgling engineer Sam Walczak (Barton) as she ventures deep into the countryside, where the monolithic Malestrazza Building is being prepared for demolition. Constructed by an obsessed architect, the Malestrazza Building has a chilling history. Many of the previous inhabitants were entombed alive in the massive structure, and the deeper Sam digs into the life details of the eccentric architect who designed it, the more convinced she becomes that she will be the final victim in its malevolent legacy. Perhaps by confronting her own sordid past, Sam can escape the curse and somehow find a way to start life anew.

Josh Strait
as Vincent
View All

Critic Reviews for Walled In

It throws in nightmares, hallucinations, red herrings and other sinister developments that seem to leapfrog one another more than they actually add up to something.

Eight stories... and none of them good.

Audience Reviews for Walled In

The only scary parts was when Sam Walczak (Mischa Barton) got lost in dark on 8th floor and hearing voices. But other than that, this wasn't that much scary. The starting was great enough to make you want to watch the rest. I don't know whether it's me that thinks Mischa's acting was so-so in this movie. The story was okay. Not a waste of time but not that great either.

Based on a bestselling French novel apparently. I have to say I was disappointed with this. It sounded like a great setting for a horror film with a good back story. However it just slowly plods on to the conclusion, some of the dialogue was pretty bad I have to add. Not sure how Mischa Barton got talked into this.

It is such a shame directors are running out of Ideas.

I really like the concept of this film. The art direction is stunning and the cinematogrphy is great. Its biggest flaw is that it isn't scary. Its dialogue is pretty terrible and the plot uses many cheap twist tricks that any audience member will see coming. Overall, not bad but just not good enough to warrant a whole-hearted recommendation.