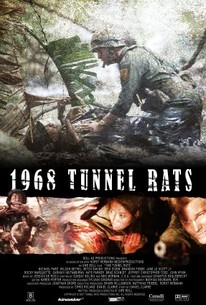 Notorious director Uwe Boll takes a break from beating his critics to turn out this deadly serious war film centering on the battlefield experiences of a U.S. combat unit sent to root out and kill Viet Cong soldiers who have been stealthily attacking American troops via an elaborate series of underground tunnels deep beneath the jungles of Vietnam. ~ Jason Buchanan, Rovi

With 1968: Tunnel Rats, Boll continues to show himself to be an unusually versatile filmmaker -- outrageously awful in any genre.

A good film from Uwe Boll? You bet!

Tunnel Rats is a surprinsly accomplished film from director Uwe Boll. Based on the Tunnel Rats of the Vietnam war, 1968 Tunnel Rats is a thrilling low budget war film. The film has a take no prisoners attitude and it's by better than any other of Boll's previous repertoire of work. Tunnel Rats, though flawed is a very accomplished film, with a decent cast and claustrophobic scenes in the tunnel systems of the Viet Cong. Thought not accurate, it does give you a slight glimpse of what the men on seek and destroy mission in the tunnels of the Vietnamese jungle went through, a tense, thrilling film this is one oif Uwe Boll's better films. Tunnel Rats is a raw, gritty and gory war film not for the faint of heart or if you're a traditional Boll basher out to just talk shit about his films, then skip this one, because this one won't make you change your mind and you'll hate it just because Uwe Boll made the film.

This is about the Vietnam war and the A group of US Solders crawling down into the Vietnamese tunnels, trying to flush out the enemy. Its pretty graphic, and its based on actual events. This group of US Fighting forces were unrecognized for years and thats to bad. I warn you this movie is not for the weak of heart, and anyone who suffers from flashbacks might want to avoid this one. The movie itself is of good quality. The ending about sums up the heart of every US Solder. Its not an outstanding movie, just a good movie, 3 ½ stars.

Tunnel Rats takes place during the Vietnam War and shows a special combat unit that is sent out to hunt and kill the Viet Cong soldiers that hide out in endless tunnels underneath the jungles of Vietnam its a very dangerous mission and most if not all wont get out alive cause as these soldiers are hunting and being hunted the Viet Cong have also attacked there main base camp taken it by surprise, Well first of all yes this is another movie by the infamous for bad movies Uwe Boll the exception here is this one isnt bad at all and comes out as realistic as possible i happen to like some of bolls work so this one might not be for all tastes