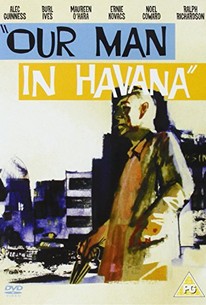 Our Man in Havana Photos

Graham Greene wrote this witty comedy inspired by Cold War paranoia. Jim Wormald (Alec Guiness) is an Englishman selling vacuum cleaners in Cuba on the cusp of the revolution. Hawthorne (Noel Coward), a British intelligence agent, is looking for information on Cuban affairs and recruits Jim to act as a spy. Jim has no experience in espionage and no useful knowledge to pass along, but Hawthorne is willing to pay for his services, and since Jim's daughter Milly (Jo Morrow) has expensive tastes, he can use the money. To keep Hawthorne happy (and his paychecks coming in), he turns in reports on the Cuban revolution that are copied from public documents, "hires" additional agents who don't exist, and presents blueprints of secret weapons that are actually schematics of his carpet sweepers. However, Hawthorne and associate "C" (Ralph Richardson) think that Jim is doing splendid work and encourage him to continue; meanwhile, Capt. Segura (Ernie Kovacs), the elegantly corrupt chief of police, has been fooled by Jim's charade into believing he's a real spy -- and has also become attracted to Milly. Our Man in Havana also features Burl Ives and Maureen O'Hara in supporting roles. ~ Mark Deming, Rovi

Rachel Roberts
as Prostitute
View All

Critic Reviews for Our Man in Havana

The mixture of mayhem and heehaw is particularly tricky to handle, and not even the sure hand of Director Reed has always achieved a smooth blend.

Polished, diverting entertainment, brilliant in its comedy but falling apart towards the end when undertones of drama, tragedy and message crop up.

A real 'winds of change' film, with traditional values crumbling in the heat of pre-revolutionary Cuba. Guinness is wonderful.

For those who regard Alec Guinness as the niftiest little con man on the screen, we will guarantee Our Man in Havana to be a source of immeasurable fun.

Guinness is in above-average form, and Ernie Kovacs is wonderful as the callous but charming government official with a soft spot for Guinness's daughter.

Coward's performance is a glorious caricature of the impeccable bureaucrat.

Taste and discipline, rarely evidenced in Hollywood, are the modest but solid virtues of this British film.

... a lampoon of international espionage games and the gullible officers running Britain's MI6 like an old boy's club. Everyone on their honor and all that.

The main weakness is the absence of economic, expressive cutting and visual flow. As a result, certain half-way stretches of dialogue become tedious to watch.

As hilarious as it is absurd, this droll comedy about spies in Cuba stars the prodigiously talented Guinness.

So much potential in casting, script etc... but the translation from the book didn't quite make sense on screen.

At once very much of its time and surprisingly modern and relevant to today.

Audience Reviews for Our Man in Havana

A very droll comedy. Some of the commentary isn't fully explored but Guiness' central performance is deeply complex and often hilarious. His interactions with Coward are delightful.

This is from the Martini Movie Collection, There are a number of movies I never heard of in this collection. this one called Our Man in Havana. Its hard to decided if this is supposed to be a comedy, a suspense film or drama. This movie filmed in Cuba in 1959, before it closed its doors to America, also by the looks of things was quite rich and beautiful, a vacuum cleaner salesman is recruited to be a British Agent, he makes up intelligence and agents that do exist, everything is going alone fine till Britain awards him a secretary and then his world starts to crumple. A very enjoyable film noir title to say the least. The recipe along with this film is Cuban Martini, and you might need a few to help you enjoy the movie more. 3 1/2 stars for this one.

Alec Guinness plays the hapless secret agent in a tale of secret service blunders and ministers who can't lose face that still rings true today. Superbly clever yet still light and humorous entertainment. The most enjoyable movie from the B&W era that I've seen. Filmed during the first months of the Cuban revolutionary government, it was set shortly before the revolution and the Cuban missile crisis that it almost prophetically predicts.

Our Man in Havana Quotes