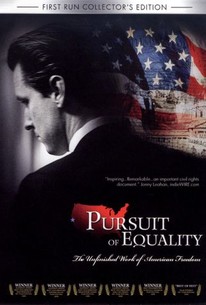 Filmmakers Geoff Callan and Mike Shaw examine the shifting perception of legal unions in 21st Century America with this documentary centering on the subject of same-sex marriage. San Francisco Mayor Gavin Newsom was just thirty-five days into his term when, on February 12, 2004, he gave San Francisco's Assessor-Recorder Mabel Teng orders to preside over the marriage of iconic lesbian activists Del Martin and Phyllis Lyon. Shortly thereafter, United States President George W. Bush implored Congress to pass an amendment explicitly defining marriage as a union between a man and a woman. As thousands of same-sex couples flocked to San Francisco City Hall in hopes of pledging their love for their partners, a deeply divisive storm began to brew in the American political landscape. Protestors accused Mayor Newsom of political anarchy, demanding that he resign immediately and that the weddings stop. Less than one month later, on March 11, 2004, the justices of the California Supreme Court declared that same-sex marriages were to cease immediately. In this documentary, filmmakers allow viewers a closer look into San Francisco's new generation of politics while examining the long-term implications of civil and human rights decisions and posing questions about the roles that values and government play in the lives of everyday Americans.

Lewis Nelson
as Narrator
View All

Critic Reviews for Pursuit of Equality

There are no critic reviews yet for Pursuit of Equality. Keep checking Rotten Tomatoes for updates!

There are no featured reviews for Pursuit of Equality at this time.