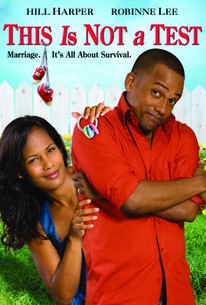 This Is Not a Test Photos

Writer/producer/director Chris Angel examines the paranoia of life in the age of terrorism with this drama about a Los Angeles man who attempts to prepare for the worst after becoming convinced that his city has been targeted for a nuclear attack. Carl (Hill Harper) and Vivian Ashby (Robinne Lee) are a young couple just getting started in life. They're attempting to conceive a child, and as Carl spends his days mentoring inner-city teens, Viv goes to work for a progressive candidate for city council. Their ideal life is shattered when Carl begins experiencing a recurring dream in which he fails to save Viv after terrorists set off a nuclear bomb in the city. Upon seeing a news report alerting citizens to a heightened terrorist threat in Los Angeles, Carl finally decides to conquer his fears by becoming more proactive. It's during a seminar hosted by terrorism expert Robert Forte (Eddie Cahill) that Carl first encounters comedian Tom Arnold (playing himself). Arnold, too, is concerned about nuclear terrorism, and hires Carl to design a fallout shelter for his Malibu home. When Carl decides to build his own fallout shelter, Viv begins to think that his paranoia has finally gotten the best of him, and refers him to one of her co-workers, LAPD officer Rick Smyth (Gordon Currie). But Rick has an ulterior motive in talking to Carl, and purposefully gives him bad advice in hopes of driving he and Viv further apart. Though Carl hatches a plan to sidestep the disaster by moving to Canada, Viv's candidate wins the election and refuses to leave Los Angeles. Later, when Carl arrives at Santa Monica Airport determined to get out of the city while he still can, the civil defense warning system goes off, forcing him to decide between making a quick escape, or venturing back into the city to be with the woman he loves.

Tom Arnold
as Himself

Critic Reviews for This Is Not a Test

There are no critic reviews yet for This Is Not a Test. Keep checking Rotten Tomatoes for updates!

Audience Reviews for This Is Not a Test

There are no featured audience reviews yet. Click the link below to see what others say about This Is Not a Test!

This Is Not a Test Quotes