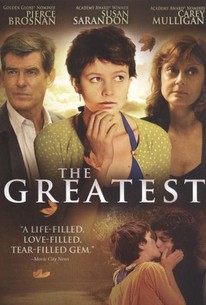 Critics Consensus: It's burdened by a predictable, overly melodramatic story, but The Greatest benefits from strong performances by its talented cast.

Critics Consensus: It's burdened by a predictable, overly melodramatic story, but The Greatest benefits from strong performances by its talented cast.

Critic Consensus: It's burdened by a predictable, overly melodramatic story, but The Greatest benefits from strong performances by its talented cast.

Follows Allen and Grace Brewer, a grief-stricken couple whose family has been pushed to the breaking point by the death of their older son, Bennett, in a car crash. When a young woman, Rose, shows up a few months later announcing that she is pregnant with Bennett's child, the Brewer's are forced to take her in. At first, Rose's presence threatens to tear the family even further apart but, eventually, her interaction with each of the Brewers proves to be the very thing that brings them back together.

Dante Clark
as Dante
View All

News & Interviews for The Greatest

Critics Consensus: Titans Is Not A Kraken Good Time

View All The Greatest News

Critic Reviews for The Greatest

The real surprise is Brosnan's silent, agonized performance; his post-007 career has been one long campaign to prove he's got the goods.

Overwrought in all the wrong ways, The Greatest doesn't do its normally excellent cast any favors.

A meditation on loss by a writer-director whose honesty, sensitivity and intelligence more than mitigate the film's histrionic qualities.

Sarandon and Brosnan are very good, indeed, Brosnan surprisingly so. In fact, Brosnan has never been so opened up, so emotional and yet so precise in his work. It's a lovely performance in a film that only sometimes deserves him.

Though it sometimes feels more like a collection of scenes than a complete story, some moments are so raw and insightful that they feel like a punch to the heart.

What makes The Greatest work so well is that Feste clearly remembers what it's like to be 18 and to believe your one chance at joy has passed you by.

Although Feste delivers a well-acted, competently directed film with The Greatest, it ultimately lacks the originality that could lift it out of the fog.

...a passable debut from a relatively promising director...

Even if you want more from a film than a depiction of reality, you'll still appreciate the stars' performances. But you'll find yourself thinking it could have been so much better if rendering grief effectively didn't seem like the only goal.

First-time writer-director Shana Feste has made a wise, insightful movie about family, grief, and how awful and how wonderful it is to discover that life goes on after someone you love dies.

The title is incorrect.

Audience Reviews for The Greatest

The plot is pretty sad and depressing but it is hard to feel anything at all and not be left cold watching this movie - which is certainly a fault of all those melodramatic performances from most of the cast, the film's endless clichés and how predictable everything really is.

This drama film is about grief and the different ways it can affect people, it was very good. I believe this is a depressing tale that forlornly tries to uplift during its final moments, but never escapes the shackles of its distressing storyline. The performances, including Pierce Brosnan, Susan Sarandon, Carey Mulligan, are universally wonderful, but the relentless dour tone makes The Greatest an easy film to admire, but a hard one to truly enjoy.

This was an over-dramatic, over-emotional and an overdone movie in almost all respects. The grieving of the parents for their dead son left no emotional impact, and so was the case with the dead guy's pregnant girlfriend and his brother. However, the execution was such that it almost brought me on the brink of weeping. I'd also like to clarify that I came on the verge of weeping due to the sheer boredom and not due to the effect generated by any of the scenes. The characters were so lame that it left no scope for good performance, so I can't comment on anyone's performance here.

A glorious, unforgettable and love-filled gem of a movie. A heart-wrenching, deeply moving and astonishing film that takes your breath away. A triumph that fills your soul with hope and love. One of those cherished and remarkable films that you will just have to see. The performances are all extraordinary, some of the deepest and most effective acting you will see in a while. Pierce Brosnan is absolutely magnificent, he gives an affectionate, open and beautiful performance. Susan Sarandon gives a brilliant and heartbreaking performance. Carey Mulligan gives a wonderful and tremendous performance just showing more of why she is a born star. A gorgeous and outstanding movie.