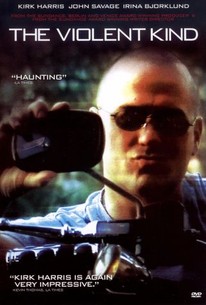 In the tradition of Stanley Kubrick and David Lynch comes The Violent Kind, a chilling psychological thriller tracing the mental descent of an Iraq War veteran whose desperate attempt to reunite with his young wife and veteran father yields horrifying consequences. Terry Malloy (Kirk Harris) is a US Marine who has just served three tours of duty in Iraq. But life back home isn't anything like life on the battlefield, and upon returning home, Terry invites his wife and father to the family cabin on Montana. There, the past collides with the present as the family's dark past is dragged screaming into the daylight, and a trained killer learns that there is truly no going back.

Critic Reviews for The Violent Kind

Director Geoffrey Pepos wants to show that posttraumatic stress causes combat veterans to destroy themselves and the people they love, but he has little interest in unpacking his characters' war experiences beyond cliches.

Audience Reviews for The Violent Kind

You know this film really did nothing for me, as I really didn't understand what it was trying to accomplish, so thumbs down for that.