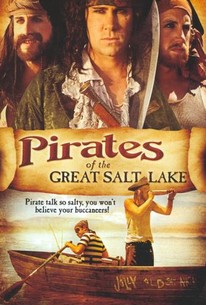 Two guys dream of becoming the scourge of the seven seas but have to settle for paddling around a shallow lake in this independent comedy. Kirk Redgrave (Kirby Heyborne) is a well-meaning but overly imaginative teenager growing in the suburbs of Salt Lake City. Determined to remake himself into someone exciting and dangerous, Kirk dons a pirate's hat, gets a rowboat, and begins calling himself Cap'n Kirk, the scallywag of the Great Salt Lake. While Kirk's mom, a strict Mormon widow, is mortified by her son's new hobby, Kirk soon finds a kindred spirit in Flint Weaver (Trenton James), a wholesome guy who wants to seem more dangerous in order to attract the attention of cute waitress Ruby (Emily Tyndall). However, the guys move one step closer to being real pirates when they find a map that will supposedly lead them to real buried treasure, though Drake, the owner of a neighborhood second-hand shop, is already looking for the spoils. Pirates of the Great Salt Lake was the first feature film from writer and director E.R. Nelson.

Critic Reviews for Pirates of the Great Salt Lake

Promoted as Don Quixote meets Pirates of the Caribbean, this piece of Utah whimsy showcases the limits of low-budget filmmaking.

A fun film with a quirky sense of humor. Enjoys poking fun at Pirates of the Caribbean and in my humble opinion, it's a better film too. Think Napoleon Dynamite.

Audience Reviews for Pirates of the Great Salt Lake

There are no featured audience reviews yet. Click the link below to see what others say about Pirates of the Great Salt Lake!