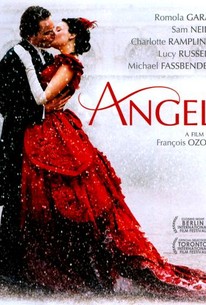 François Ozon is a Gallic Michael Winterbottom, if not in style then at least in his determination to do something different every time. As with Winterbottom, sometimes the result is great and sometimes not.

The French director François Ozon has taken Elizabeth Taylor's beadily satiric novel and transformed it into a droll and somewhat disturbing fantasia on the creative temperament.

Choosing to clothe his whole movie in the outré frocks of a bad Technicolor romance, Ozon serves up camp fun, but that's it.

But this really is a failure - an honourable failure, arguably, but a failure, and a pretty complete one at that.

The film bristles with contemporary subtext and takes swipes at mediocre artists who believe their own press, and the culture of celebrity.

Ozon's film plays a difficult hand, never settling for all-out high kitsch or straight melodrama. One of the year's most charming failures.

Ozon films this saga with a straight face, but the overripe dialogue, dodgy back-projection and unrestrained acting all signal that he is smirking behind his hand.

A film that's a total mess, but in kind of a beautiful way.

With a surface like a trashy novel and the undercurrents of a social satire, Ozon's British period drama is a slightly odd mix, feeling both arch and astute at the same time.

How director Francois Ozon received a Golden Berlin Bear nomination for this shoddy movie, The Sneak will never know.

A less than heavenly time is guaranteed for anyone who parts with their hard-earned to watch this formulaic period film.

The background outdoor scenery was a joke. I seriously couldn't get passed that. Oh, and the sappiness of it all, too. I turned this off after an hour...

it gets two stars purely for sam neill who looks gorgeous as ever!! but this movie isnt for me!! the leading lady cant act for shit and gives the character such arragance and irritates me to the point that makes the movie so unbearable its truly annoyingly terrible!!!

[font=Century Gothic]"Angel" starts in Edwardian England where young Angel(Romola Garai), daughter of a grocer(Jacqueline Tong), dreams of living in Paradise House, a grand mansion, not that far away physically but eternities away socially. The thing is she wants to be there as mistress, not as a servant like her Aunt Lottie(Janine Duvitski). So, while avoiding school, Angel daydreams, writes them down and sends them to publishers in London. Miraculously, one(Sam Neill) accepts the manuscript and the book becomes a best seller. Angel's success puts her in the company of the top rungs of society that include Lord Norley(Christopher Benjamin) and his two grown children, Esme(Michael Fassbender), a painter, and Nora(Lucy Russell), an aspiring poet and huge fan.[/font] [font=Century Gothic][/font] [font=Century Gothic]Written and directed by Francois Ozon, "Angel" is a deceptively beguiling film. On the surface, the movie may seem like just another old fashioned rags to riches tale(so old fashioned, that rear projection is used on more on than one occasion) but Ozon subverts this by ironically placing a self-involved heroine at the center of the story whose vapid romances stand in direct contrast to Esme's dark and realistic paintings which do not sell. And instead of becoming a better person with her success, Angel becomes even more driven to write down her dreams which she falls deeper and deeper into.[/font]

This movie could have so much better, but that's not to say it was bad. If you accept the fact that this was filmed as if it were made in the past and come to see of it more as a dream of her real life more than the actual reality of it (does that make sense?), then it seems a heck of a lot better.