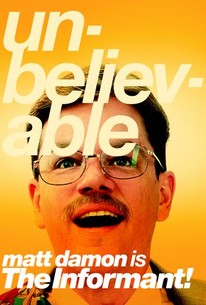 Critics Consensus: A charismatic turn by star Matt Damon and a consistently ironic tone boost this quietly funny satire about a corporate whistle-blower.

Critics Consensus: A charismatic turn by star Matt Damon and a consistently ironic tone boost this quietly funny satire about a corporate whistle-blower.

Critic Consensus: A charismatic turn by star Matt Damon and a consistently ironic tone boost this quietly funny satire about a corporate whistle-blower.

A rising star in the agricultural industry suddenly turns whistleblower in hopes of gaining a lucrative promotion and becoming a hero of the common people, inadvertently revealing his penchant for helping himself to the corporate coffers and ultimately threatening to derail the very investigation he helped to launch in this offbeat comedy from Academy Award-winning director Steven Soderbergh. Mark Whitacre (Matt Damon) was fast rising through the ranks at agri-industry powerhouse Archer Daniels Midland (ADM) when he became savvy to the company's multinational price-fixing conspiracy, and decided to turn evidence for the FBI. Convinced that he'll be hailed as a hero of the people for his efforts, Whitacre agrees to wear a wire in order to gather the evidence needed to convict the greedy money-grabbers at ADM. Unfortunately, both the case -- and Whitacre's integrity -- are compromised when FBI agents become frustrated by their informant's ever-shifting account, and discover that he isn't exactly the saintly figure he made himself out to be. Unable to discern reality from Whitacre's fantasy as they struggle to build their case against ADM, the FBI watches in horror as the highest-ranking corporate bust in U.S. history threatens to implode before their very eyes. Scott Bakula, Joel McHale, and Melanie Lynskey co-star. ~ Jason Buchanan, Rovi

Yoshio Be
as Kazutoshi Yamada

Chic Daniel
as FBI Agent at Raid
View All

News & Interviews for The Informant!

New on Netflix in August
Definitive Matt Damon Movies
RT on DVD & Blu-Ray: The Informant! and The Damned United

View All The Informant! News

Critic Reviews for The Informant!

Although not a blockbuster, The Informant is an interesting, diverting film.

In the end, it seems as though it's better to aim for searing moments and whiff on greatness than to shoot for the middle and hit it.

You never know where you stand with Steven Soderbergh, but you cannot accuse him of resting on his laurels -- or making the same film twice.

It may come across like a self-satisfied madcap bauble, but that titular exclamation mark is the key that unlocks the myriad subtextual delights of Soderbergh's timely latest.

Director Stephen Soderbergh and its star Matt Damon have crafted a skittish caper movie, a pyrotechnical display of colourful lies that unravel to a giddy retro score.

Soderbergh has commissioned a relentlessly jazzy, wacky musical score from Hollywood veteran Marvin Hamlisch just so that we realise it's all supposed to be funny.

Soderbergh's easy, breezy dismissive style gives the distinct impression that we are all being conned.

As the puzzle unravels, the sickening feeling we've seen this somewhere before becomes more and more overwhelming.

Hamlisch's score is the highlight of the film, being almost solely responsible for its off-beat comic tone, punctuating and even commenting on humorous moments with a wink and a twinkle in its eye.

Powered by a fantastic performance from Matt Damon, the new Steven Soderbergh-directed film is an intriguing movie that slowly unfolds to reveal a rather powerful final punch.

Soderbergh knows how to entertain, and The Informant is no exception.

The lead character is so impenetrable and treated in such an offhand way that he quickly becomes boring.

Audience Reviews for The Informant!

Matt Damon is so confident and charismatic as a compulsive liar who becomes an unusual corporate whistleblower for the FBI, and even if the narrative is not as compelling as it could be, this is a nice film that manages to be interesting in all its oddness.

Matt Damon becomes the American other Americans think of if asked "what is an American?" in this pointed farce that targets the difference between what Americans are versus who we think we are. The barbs are fast and furious, probably requiring a second viewing, and'll leave you wondering: "when did I know this likable charmer was lying" and "do I realise when I am?" All in all an entertaining package.

A return to form for Soderbergh, Matt Damon puts in his most brilliant comedic performance.