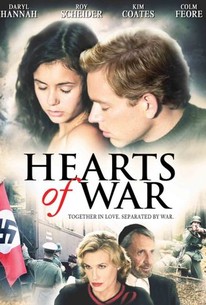 The Poet (Hearts of War) Photos

A young German officer and the daughter of a Rabbi find their blooming relationship threatened by the onset of World War II in director Damian Lee's emotional war romance. The setting is German occupied Poland, and Europe is finally feeling the full devastation of Hitler's might. German Officer Oskar and his Jewish girlfriend Rachel are deeply in love, but tragically torn apart by the violent village massacres that spread like a plague across the land. Convinced that she will never be reunited with her true love, expectant mother Rachel reluctantly marries respectable Jewish man Bernard, who longs to earn her love by raising her child as his own. Later, when Rachel and Oskar unexpectedly cross paths amidst the violence of the Russian front line, a sudden tragedy prompts one man to make the ultimate sacrifice.

Critic Reviews for The Poet (Hearts of War)

There's a viable story lurking within the World War II melodrama The Poet, but much of it likely landed on the cutting room floor.

This account of the WWII star-crossed love between a rabbi's daughter and a war-hating Teuton officer wants very much to be taken seriously. This proves impossible, since the script, casting and wartime atmosphere play as pure make-believe.

The audience is herded from cliché to unintentional farce to insult-to-its-intelligence.

Audience Reviews for The Poet (Hearts of War)

There are no featured audience reviews yet. Click the link below to see what others say about The Poet (Hearts of War)!

The Poet (Hearts of War) Quotes